By William Douglass, The Color Of Hockey

Let us turn to the hockey sage Kool Moe Dee while discussing Nashville Predators defenseman P.K. Subban,  the Montreal Canadiens, and the Habs’ first-round exit from the Stanley Cup Playoffs. 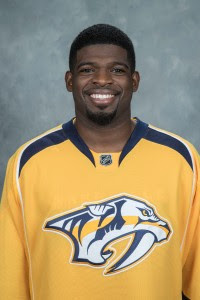 A song by Dee – or is it, Mr. Moe Dee? –  probably best sums up how Subban must have felt after watching the Canadiens – his former employer – burp up a two-game-to-one series lead and suffer a 3-1 loss to the New York Rangers Saturday that ousted the Habs from the playoffs:

Last summer, Subban was the poster boy for Montreal’s dysfunction – the Habs’ failure to make the playoffs (seeming to forget that All-World goaltender Carey Price

in the locker room, and the inability of the coach to execute his master plan to lead the Canadiens to the Stanley Cup.

, too headstrong, too irresponsible defensively

So they shipped him

to Nashville in June for defenseman Shea Weber

in a move that then-Head Coach Michel Therrien proclaimed made the Canadiens “a better team now.”

So how’d it work out?  The Habs fired Therrien

in February after the team faded following a 13-1-1 start to the 2016-17 season. Montreal finished atop the National Hockey League’s Atlantic Conference with a 47-26-9 record and Cup expectations were high, particularly after the trade and Therrien’s dismissal. Then came the Rangers.

As for the trade participants, Weber had a good year in Montreal, scoring 17 goals and 25 assists in 78 games. Subban had an injury-plagued regular season that limited him to 10 goals and 30 assists in 66 games. Subban played 12 fewer games than Weber but scored 40 points to Weber’s 42.

But the bottom line stat for most fans is that Subban and the Predators are still in the playoffs. Weber and the Canadiens aren’t after making what was sold as a “win now” trade.

Revenge is as sweet as the ice tea served cold south of the Mason-Dixon line, and Subban fans are basking in Montreal’s playoff misfortune. Cue Elton John’s “I’m Still Standing.”

PK Subban would have scored there. pic.twitter.com/qVVRsZEzLC

this morning when he’s off to the 2nd round & @CanadiensMTL

If y’all weren’t expecting PK Subban tweets after Preds swept and Habs died in game 6 of round 1, then I don’t know why y’all even twitter.

failure. Because trading him didn’t change a thing. Even with Price.— Edberg_Subban (@taphengsai) April 23, 2017

every available photo of P.K. Subban looks like someone just told him Shea Weber’s grit & leadership will lead the Habs to the promised land pic.twitter.com/bDubTaPlPm

We bring you a live look in at P K Subban. pic.twitter.com/AXHcrPMQXh