NEW HAVEN, Ct. — For the first time in my life, I’ll be experiencing Father’s Day this weekend without my father. Clifton McClean Sr. passed away just less than a month ago at the age of 85.

He had been ailing for over a year, so it was something that our family had been preparing for. However, the finality of death is still something that many of us have a hard time to come to grips with.

My dad served his country honorably as a proud member of the Marine Corps. He actually was a willing volunteer at the time. Needless to say, this was a different time and different vibe that circulated the country.

After going through basic training on the West Coast, he and many others would be sent overseas to participate in the Korean War. He was part of several groups that battled at the teeth of the 38th parallel as well as the Battle of Inchon.

When the Korean conflict ended, he served two more years before receiving his honorable discharge. To no one’s surprise, he related several war stories about his experiences over in Korea.

He said that serving at the 38th parallel was one of the most physically demanding times of his life because of the extreme cold. He never really talked about in depth about some of the things he had to do there, but just through his conversation, I knew it was something that impacted him throughout his entire life.

Like most fathers and sons, we had our ups and downs on several occasions. My folks divorced when I was 10 years old and it was something that I struggled with a lot at the time.

Despite that, there was always one thing that we bonded on — our love of baseball.

My dad had a long career as a semi-pro baseball player that spanned over several states and several decades. A left-handed outfielder, he was still playing up until his late 40’s as was the norm back in the day.

He played with and against many players who would go on to play in the Negro Leagues, the minor leagues, and the majors. In fact, while serving with the Marines, he played on the Corps national traveling team that barnstormed for many years.

At the age of 19, he was given a tryout with the Brooklyn Dodgers at Ebbets Field. It came shortly after Brooklyn players like Jackie Robinson, Don Newcombe, and Roy Campanella had integrated the sport.

There was no amateur draft at the time of his tryout, so by him being a minor at the time, the Dodgers needed to get permission from his mother to pursue his career any further. As the story goes, the team was very interested in signing my dad.

The Dodgers insisted to his mother that they were going to look after him on and off the field during his development. During that era, many black ballplayers — regardless of age — were put up in homes within the black community wherever they were playing.

Sadly back then, all black players weren’t allowed to room with their white teammates — minor league or major league — as well. Despite all their assurances, my grandmother would not allow my dad to sign with the Dodgers.

Needless to say, this was a crushing blow for him. It’s something he always looked back on with tinges of anger and regret. As I’ve said several times, it was completely different era whether it be sports, politics, or entertainment.

Clearly, my dad looked at it as a great opportunity and a fulfillment of a dream. Whether she was or wasn’t privy to what black ballplayers had to go through then, my grandmother saw it with a very cautious and protective eye regarding her son.

Despite that, my dad maintained his baseball career. I mentioned that he played for the Marines national team during his tour of duty. When his military time ended, he resumed playing baseball.

As a youngster, I gravitated to the sport as well. I watched my dad play several times and always dreamed of being a major leaguer as well. My main baseball memories with dad were watching the All-Star Game and World Series every year.

My dad was a Yankee fan and Joe DiMaggio was one of his favorite players growing up. Over the years, he became a huge fan of guys like Reggie Jackson, Rickey Henderson, and Curtis Granderson when they wore the pinstripes.

As for me, I was a Met fan. Despite listening to the hype and propaganda about the lordly Bronx Bombers, the Amazins’ was the team I began — and still — follow. Truth be told, I became a Met fan out of spite.

But believe it or not, it wasn’t always that way. When I was younger, I followed black players, not actual teams. Because their games were broadcasted locally, I was a huge fan of Reggie Smith and George Scott when they played for the Boston Red Sox in the 60’s.

I also remember the iconic close-up TV shots of Bob Gibson when was in his heyday pitching for the St. Louis Cardinals in that same era. I felt like he was looking right at me when he was looking into the camera to get the sign from his catcher.

So when I started seeing guys like Cleon Jones, Tommy Agee, Ken Singleton, and Ed Charles on the Mets squad, I immediately was hooked. Just shortly after that, the Miracle Mets would go on to win the 1969 World Series.

For many years, I and my dad would go at in a good natured way of ragging on each other’s team. I’d be wearing my Met hat and he’d say, “I raised you to be smarter than that”.

My reply? “You did make me smarter than that. That’s the reason why I don’t like the Yankees”. This would on and off, back and forth for years and years. Needless to say, because of the Yankees success, I eventually was taught “the error of my ways” as dad would say.

Which brings this article to full circle.

Just before he passed, we watched the Derek Jeter jersey retirement ceremony while my dad was in the hospital. He had been very weak over the previous days, but the whole ceremony perked him up.

Ironically, this would be the last major baseball event we’d watch together. It really didn’t dawn on me until later just how much baseball was the common thread between me and my dad.

I remember playing ball with my friends in until my dad called me in one warm night in July of 1971 to watch the All-Star Game. That night, Oakland’s Vida Blue started for the American League and Pittsburgh’s Dock Ellis started for the National League.

It’s still the only time that two Black pitchers ever started in the All-Star Game.

The aforementioned memories of Bob Gibson and the 1969 Mets were also shared times with him. Even though I knew it all along, I never realized that we watched and shared a generation of baseball, either live at a game or watching on TV.

This season has seen the reemergence of his beloved Yankees. Not expected to be ready to contend quite yet by the “experts”, New York currently leads the AL East. After a slow start, they went on a tear and had the best record in baseball at one point.

But it’s the makeup of the team that’s been just as surprising. On a given night, especially when either C.C. Sabathia, Michael Pineda, or Luis Severino are on the mound, the Yankees are fielding a team of majority black ballplayers.

One night, I and my buddy Robert Qualls from Tailor-Made Media’s MARQUEE were just doing a random sampling. Chris Carter at first, Starlin Castro at second, and Didi Gregorius made up the infield. 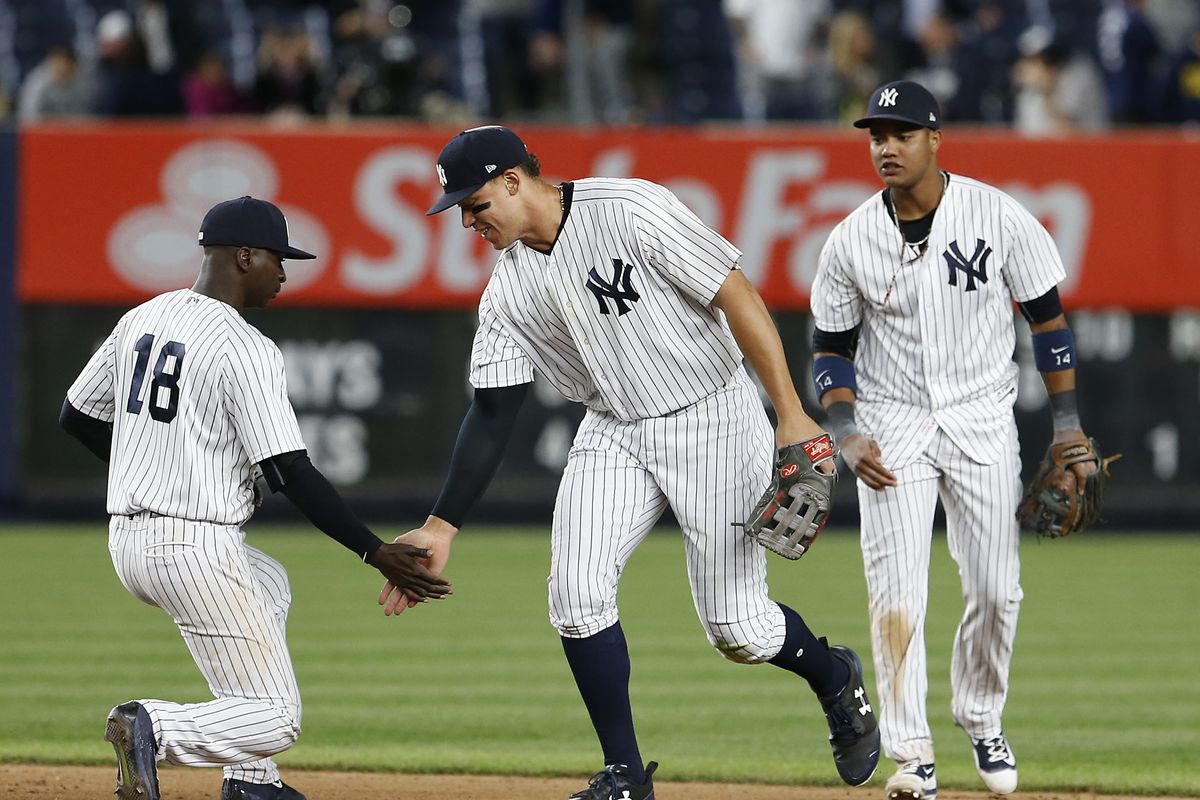 Throw in the injured Aroldis Chapman as well as fellow relievers Dellin Betances and rookie Domingo German, they join to the aforementioned Sabathia, Pineda, and Severino in the pitching staff.

While the jury is still out on whether this will translate into something big for the Yanks, the irony hasn’t been lost on this lifelong Met fan. Most nights after watching the Mets find another way to lose, I find myself watching those guys from the Bronx.

In fact, this past week while the Yankees were on the West Coast, I’d watch the Mets and then go right to the Yankee game. After all these years, my dad finally got me to watch Yankee games without even telling me.

I guess there’s still some magic left in the grand old game after all.

Happy Father’s Day, Dad. Rest in Peace. I’ll be watching the game for ya.

Anthony McClean can be reached via email at anthonymcclean@basnnewsroom.com.