By William Douglas, The Color Of Hockey

Some of the National Hockey League’s players of color are feeling a draft.

At least 17 minority players are among the players left unprotected by the NHL’s 30 teams for Wednesday’s Expansion Draft to help form the inaugural roster for the Vegas Golden Knights.

The players of color made available – a nicer phrase than “unprotected” – include a likely future Hockey Hall of Fame inductee,  three multiple Stanley Cup winners, three Olympians, and a few minor league prospects.

Here’s a summary of the players available:

Emerson Etem left wing. The 29th overall pick in the 2010 NHL Draft, Etem has bounced from the Ducks to the New York Rangers to the Vancouver Canucks and back to the Ducks. And he’s boomeranged between Anaheim and its American Hockey League affiliate in San Diego.

He only appeared in three games for the Ducks in 2016-17 and was held scoreless. He does have 22 goals and 24 assists in 173 NHL regular season games and 6 goals and 2 assists in 23 playoff games. 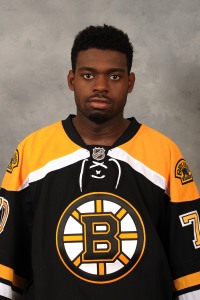 Malcolm Subban, goaltender. Subban was 24th player picked in the 2012 NHL Draft but has been unable to secure a spot on a Bruins roster that features Tuuka Rask between the pipes. Rask won the Vezina Trophy in 2013-14 as the NHL’s best goaltender.

Johnny Oduya, defense. Oduya was a member of the 2013 and 2015 Chicago Stanley Cup teams and the Swedish team that won the Silver Medal at the 2014 Winter Olympics. He had 2 goals and 7 assists in 52 regular season games for the Blackhawks last season. He has 37 goals and 145 assists in 798 career regular season contests and 6 goals and 22 assists in 106 career playoff games.

Jordin Tootoo, right wing. The diminutive dynamo of Inuit heritage was limited to 2 goals and 1 assist in 50 regular season games in 2016-17. He has 65 goals and 96 assists in 723 games with Chicago, Detroit, Nashville, and the New Jersey Devils.

His younger brother, forward Giavani Smith, was taken by the Detroit Red Wings in the second round with the 46th overall pick in the 2016 NHL Draft.

Jujhar Khaira, center. Khaira was one of the feel-good stories of the 2016-17 season when he scored his first NHL goal –  a source of pride for North America’s South Asian community. The Oilers took Khaira in the third round with the 63rd overall pick of the 2012 NHL Draft. His one goal and 2 assists were his only points in 10 games for the Oilers in 2016-17.

Jarome Iginla, right wing.  Iginla, 39, is one of hockey’s most decorated players. He’s a two-time Olympic Gold Medal winner and a recipient of the Maurice “Rocket” Richard Trophy as the NHL’s leading goal scorer in 2002 and 2004 and the Art Ross Trophy as the league’s leading scorer in 2002. He won the Lester B. Pearson Award – the most valuable player award voted by the players – in 2002.

Jordan Nolan, center. A proud member of the Ojibwe Nation, Nolan played for the Kings’ Stanley Cup championship teams in 2012 and 2014. Nolan, the son of former Buffalo Sabres Head Coach Ted Nolan, appeared in only 46 games for the Kings last season and tallied 4 goals and 4 assists.

Al Montoya, goaltender. The well-traveled Cuban-American goaltender could be on the move again. A 2004 first-round of the Rangers,  Montoya has strapped on the pads for the New York Islanders, Florida Panthers,  Phoenix Coyotes, and Winnipeg Jets before he seemingly settled in as Carey Price’s backup in Montreal.

Devante Smith-Pelly, right wing. Devo is coming off a down season in New Jersey, his third team since the Ducks chose him with in the second round with the 42nd overall pick in the 2010 draft. He scored only 4 goals and 5 assists in 50 games.

Christopher Gibson, goaltender. The Black Finn didn’t play a minute in Brooklyn in 2016-17 and had a short season with the Bridgeport Sound Tigers, the Isles’ AHL team. There, he appeared in seven games and won 6. He had a 2.52 goals-against average and .912 save percentage. 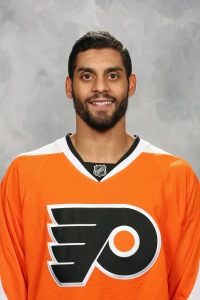 Pierre-Edourard Bellemare left wing. The French player probably enjoyed his most memorable season in 2016-17. It started with the World Cup of Hockey, where the fourth-line Flyers player became a key contributor for Team Europe and ended with him playing before his countrymen at the 2017 International Ice Hockey Federation World Championship in Paris.

In between, Bellemare had a solid enough year for the Flyers that the team re-signed him to a two-year deal at $1.45 million per year and made him an assistant captain. The 32-year-old checking line forward scored 4 goals and 4 assists in 82 regular season games. He has 17 goals and 17 assists in 237 career NHL games.

Trevor Daley, defense. Daley is experiencing the cruel business side of hockey. Win a Stanley Cup one week, get exposed to the expansion draft the next.  The 33-year-old offensively-talented and defensively-responsible player began his NHL career with the Dallas Stars in 2003-04. Daley reached the 20-point mark seven times during his tenure with Dallas.

Joel Ward, right wing.  Injuries in 2016-17 hampered the 36-year-old wing who earned a reputation as a clutch playoff performer during his NHL career. He scored 10 goals and 19 assists in 78 regular season games and 1 goal and 3 assists in six playoff games.

He’s tallied 22 goals and 30 assists in 83 playoff games for San Jose, Nashville, and the Washington Capitals.

J.T. Brown, right wing. A tough player who isn’t afraid to speak his mind on social issues, Brown had 3 goals and 3 assists for the Lightning last season. He has 18 goals and 39 assists in 262 NHL regular season games.

T.J. Oshie, right wing. Why in the world would the Capitals expose a player who notched 33 goals and 23 assists in 68 games last season? Our friends at the Russian Machine Never Breaks Capitals fan site break it down to money and uncertainty. Oshie needs a new contract and the NHL currently isn’t sure what the league salary cap will be next season. And Oshie could become an unrestricted free agent on July 1.  All that might be enough for the Golden Knights to pass on him, leaving the Caps to move forward with a new deal once the 2017-18 salary cap is set.