DANIEL SNYDER AND HIS NASTY THRILLS

Daniel Snyder is in bad company, with the National Football League, and happy about it. “Hebrew Hillbilly,” “Stinky Gringo,” “White Trash Cowboy,” “Yo’ Ass Face,” and “Tranny Surprise” are some of the cohorts that Snyder, owner of the NFL’s Washington football club and its “R-word” trademark, is THRILLED (in his own capital letters in an email) to be associated with, as the United States Supreme Court held in mid-June that disparaging and offensive trademark names are protected as free speech under the First Amendment to the Constitution.

Other trademarks that Snyder looked to for support include “Whores from Hell,” “Reformed Whores,” “Flea Market Hookers,” and “Ass Face Dolls.” (Does he look at himself in the mirror?)  Snyder’s attorneys argued in briefs to the Court that these names, and those of pornographers, and other lewd, graphic, and sexually explicit marks and images, including many with overt racial references and vulgar female nudity, had been issued trademarks, and that the Washington team should not be singled out amidst such fine company. If all of those names met with government approval, the attorneys asked, why not Snyder’s use of the R-word as well?

The Court did not directly rule on Snyder’s trademark claims, but it did find that an Asian-American rock band’s mocking use of the racial epithet “The Slants” was protected under the First Amendment as free speech, even if it was seen as disparaging and offensive to others. The Court ruled that a section of trademark law which gave the government the authority to deny trademarks which may disparage a group of people was unconstitutional government censorship. “If there is a bedrock principle underlying the First Amendment,” the Court held, “it is that the government may not prohibit the expression of an idea simply because society finds the idea itself offensive or disagreeable.”

Making offensive remarks conveys a viewpoint which is protected under the First Amendment, Justice Anthony Kennedy wrote in support of the Court’s unanimous decision. Kennedy suggested that the remedy for offensive speech would be found in the “marketplace of ideas” and free and open discussion in a democratic society; people can reject what they find objectionable. That marketplace, for both sides, could be found in publicity and public discussion; marketing, ticket and merchandise purchases, and broadcasting; and boycotts of the team, the NFL, and their products.

Amanda Blackhorse, who is challenging the team’s R-word trademark on behalf of Native Americans in a separate case from that heard by the Supreme Court, conceded that the decision in the Slants case would likely end her case but would not resolve her underlying concern about the hurtful nature of the team name.  ”Now they have the freedom to register a racist name,” Blackhorse told USA TODAY Sports. ”I don’t see what’s thrilling about that.”

She continued to wonder, “Now the Supreme Court says you can register offensive names. The question for the team is: Why would you want to?”

MONEY MAKES YOU WANT TO

Snyder’s attorneys provided the answer. The team has invested tens of millions of dollars in advertising and promoting its brand and said the team was valued at $2.4 billion, approximately $214 million of which is attributable to the R-word brand.

Snyder likes his capital, as in money, and likes his capital letters.  In 2013, he declared “We’ll never change the name. It’s that simple. NEVER — you can use caps.”  Team attorney Lisa Blatt said in a statement emailed by the team that the Court vindicated the Team’s position that the First Amendment blocks the government from denying or canceling a trademark registration based on the government’s opinion that the trademark was offensive. 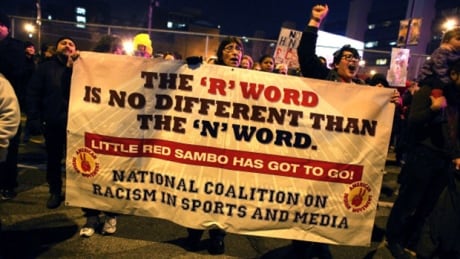 The NFL has said that it is paying for the costs of Snyder’s litigation in support of his trademark, and Snyder’s filings with the Supreme Court stated that the league was among the entities responsible for the costs of legal efforts. Despite the economic power of the NFL and the Washington football club, the Court rejected the argument of Native American organizations that government had an interest in protecting “underrepresented groups” (minorities) from being overwhelmed by more powerful interests, “bombarded with demeaning messages in commercial advertising,” or that government had an interest in encouraging racial tolerance. Suggesting that the government could approve only positive images and not negative ones were just “happy talk,” the Court said.

That concept, the Court said, “strikes at the heart of the First Amendment.  Speech that demeans on the basis of race, ethnicity, gender, religion, age, disability, or any other similar ground is hateful; but the proudest boast of our free speech jurisprudence is that we protect the freedom to express ‘the thought that we hate.’”

TRADEMARKS ARE IDENTITY, NOT APPROVAL

The Court stated that issuance of a trademark does not represent government approval of what the mark says or represents; trademark registration simply provides a way for a business or other entity to identify and market itself. The government is not expressing any opinion as to whether one should “Just Do It” in granting a trademark to Nike or whether one should “Have It Your Way” at Burger King, or with “Old Glory Condoms” in yet another case.

Leaders of  “Change the Mascot.org,” National Congress of American Indians Executive Director Jackie Pata and Oneida Nation Representative Ray Halbritter, said that despite the Court’s ruling, the case brought attention to “the NFL’s support for bigotry against Native Americans.” Change the Mascot is a grassroots campaign that works to educate the public about the damaging effects on Native Americans arising from the continued use of the R-word.

“The work of Amanda Blackhorse and other leading activists fighting against the use of the R-word has been tremendously successful and critically important. They have invaluably raised awareness about the problems with mascots such as the R-word epithet used by the Washington NFL team.”

“This is an issue we have always believed will not be solved in a courtroom, and this ruling does not change some very clear facts. Washington’s football team promotes, markets and profits from the use of a word that is not merely offensive – it is a dictionary-defined racial slur designed from the beginning to promote hatred and bigotry against Native Americans.

“If the NFL wants to live up to its statements about placing importance on equality, then it shouldn’t hide behind these rulings, but should act to end this hateful and degrading slur.”