OAKLAND (BASN) — Not long ago, Russell Westbrook, Kevin Durant, and James Harden all played together on the Oklahoma City Thunder floor, but they could not get out of each other’s way, and then went separately in their own directions via management.

Westbrook was just named the NBA’s Most Valuable Player and led the league in scoring. Durant won the MVP of the 2017 NBA Finals with the World Champion Golden State Warriors. Houston’s James Harden continued his improvement, distributing the ball to his fellow teammates for victories.

Harden created, through scoring or assists, over 5,000 points this season, the highest total in NBA history; he led the league in assists, finished second behind only Westbrook in scoring, directed the Rockets to the third-best record in the league, and defeated Westbrook’s Thunder squad in a five-game first-round playoff victory.

OKC started its maiden voyage on an old green and gold leaking cruise ship stealing the team from Seattle, Washington in 2008-09. The Supersonics moved to The Southwest to become the Thunder. The bad karma still haunts them because this team cannot beat the Golden State Warriors, San Antonio Spurs, Houston Rockets, or Memphis Grizzlies.

The three stars separation and immature departure, either was a bad case of poor management or another case of hidden neglected talent. It was both. Harden has blossomed in Houston while Durant has found a home in California. Westbrook might have received all of those triple doubles but have the Thunder really improved?  No, because of the selfishness of number “0.” Triple doubles are fine but it has to translate into Thunder victories.

Harden was the first to leave OKC. This past season Harden a.k.a., The Beard, finally grew up and started distributing the ball to his teammates for open buckets. The Rockets have become a better team under The Beard’s direction. Harden created through scoring or assists over 5,000 points this season, which is the highest total in NBA history, when he averaged 28.5 points, 5.5 rebounds, and 8.5 assists. The Rockets still need to find a dominant center (Dwight Howard was not the answer) to counter the 2017 World Champion Golden State Warriors speed and offensive power.

Russell Westbrook, the man who remained in OKC and accomplished the remarkable feat by becoming “only” the second player in NBA history, next to Hall of Famer Oscar Robertson – – to average a triple-double over an entire season by averaging 31.8 points (first in the NBA), 10.7 rebounds (10th) and 10.4 assists (third).

Westbrook still has not grasped or understands that all of the players have to be involved in the game for the Thunder team victory. Whenever Westbrook leaves a game for rest the Thunder’s offensive efficiency rating drops dramatically.

Westbrook won the 2017 NBA Most Valuable Player award as he should have, but the Thunder organization will still have to find a point guard to help Westbrook run their offense. Russell carries the ball up the floor too much. He would start the play and the offense revolved around him, everybody else stands on the floor and watches. The OKC offense becomes stagnant.

Last year the Thunder lost a very important cog to the Oklahoma Thunder offensive. Center forward Kevin Durant left for the Bay Area and the defending Western Conference Champion Golden State Warriors.  Durant left because of the play of Westbrook on the floor. In Oklahoma City, Durant often acquiesced on the floor to the offensive weapons of Harden and Westbrook to create harmony. Durant did not have to do this in Oakland. The new member of the Golden State Warriors blended in well with the share-the-ball offensive and stone cold team defense of Golden State.

Durant was named the 2017 NBA Finals MVP, incredibly averaged 35.2 points, 8.4 rebounds, 5.4 assists, and 1.6 blocks during the-5-game series on his way to win his first NBA Championship.

Now just imagine these three players on the floor with the same uniform again. 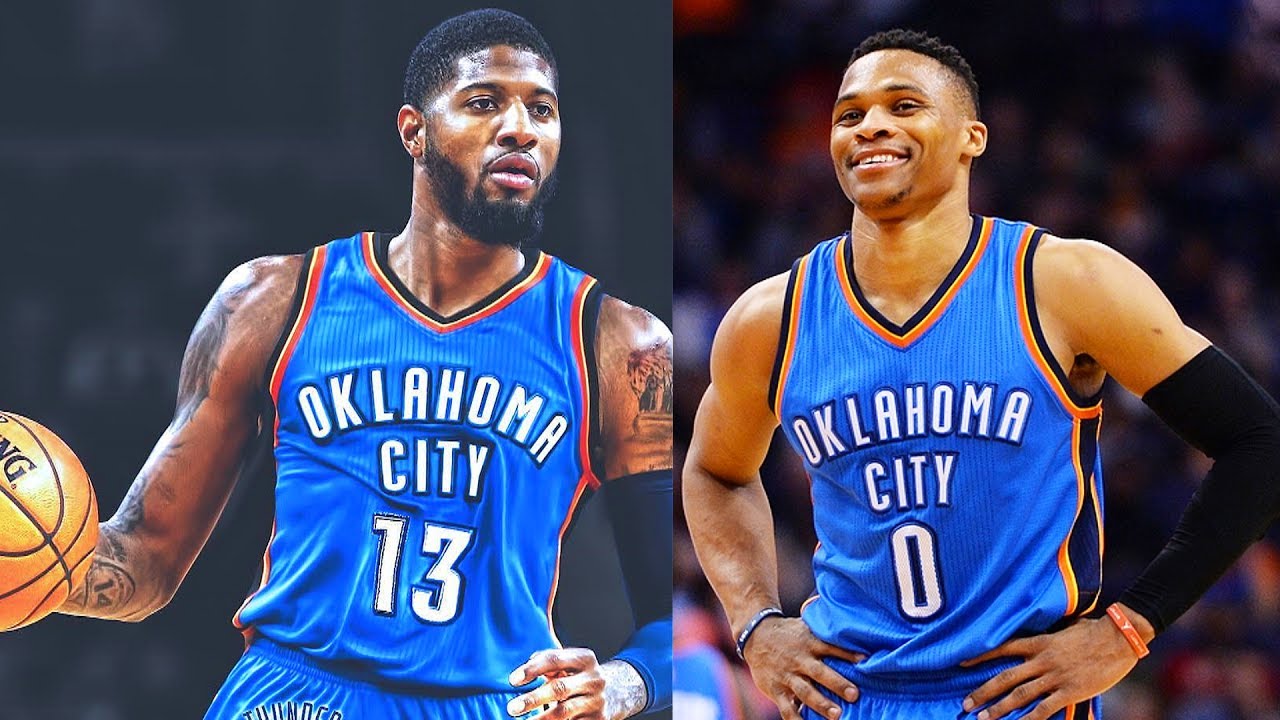