OAKLAND — On Wednesday, July 19, the Cleveland Indians ended their Bay Area tour with the Oakland Athletics at Oakland Alameda County Coliseum and San Francisco Giants at AT&T Park, losing five of six games and the AL Central Division lead. Remember it is Cleveland.

Bay Area Native Americans continue to inform Major League Baseball that they are not pleased with the team still using Chief Wahoo on their uniforms at road games. Native American protests were held on both sides of the bay and baseball fans do not care. It is not important to them they just want to see the game in peace. How can that be when they are staring at a grinning cartoonish figure on the players’ cap and shoulders every inning?

The current racial climate in this land is a loaded powder keg. These two professional teams could change the racial landscape, could reduce the racial tension. The Washington Football Club and the Cleveland Indians Baseball Club refuses to change their name and logo, stating that it is historical and traditional. These two professional sports organizations continue to release small dribbles of information keeping opponents at bay. So that they MAY or may not change that logo and that name in the next five- ten years. Meanwhile, Native Americans set and wait for these two teams to

DO THE RIGHT THING.

The Cleveland Indian organization made a half hearted effort in the spring of 2014 removing Chief Wahoo from all television promotions that is a start. In the fall of 2016, Commissioner Rob Manfred had a meeting with the mid-west baseball organization after the World Series in which the Tribe lost to the Chicago Cubs.

At the end of a live interview host Mike Golic asked Manfred about Chief Wahoo.

“Well, I understand that particular logo is offensive to some people, and I understand why,” Manfred said, according to a transcript of comments posted on Deadspin, a sports website. “On the other side of the coin, you have a lot of fans that have history and are invested in the symbols of the Indians. I think that after the World Series, at an appropriate point in time, Mr. [Larry] Dolan and I have agreed we’ll have a conversation about what should happen with that particular logo going forward.” 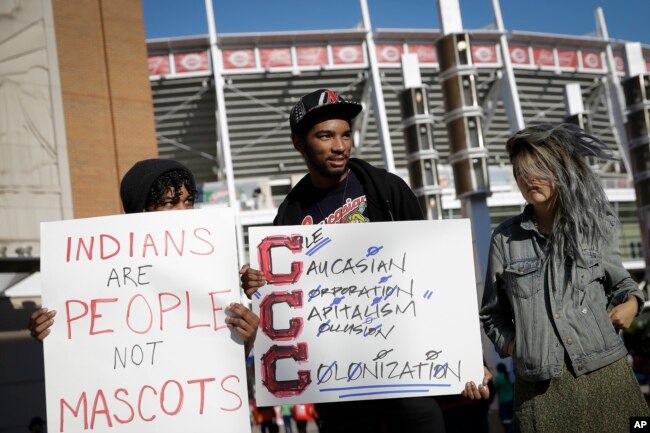 Meanwhile at AT&T Park, something was strikingly noticeable around the ballpark. Not a single African American Cleveland Indian fan had a Chief Wahoo logo on; neither did Latin American Cleveland fans. White fans, on the other hand, wore Chief Wahoo as a badge of courage, a badge of defiance, and they dressed their children to follow in their footsteps with little Cleveland Indian uniforms. This is how racism is passed from generation to generation. This is how bigotry and hate continue in this country. The Cleveland Indian Baseball Club continues this legacy and hurt.

African American and Latin American baseball fans seem to understand the pain and suffering it has caused Native American brothers and sisters. So they publicly support the cause ending the Washington Football Club’s name and the Cleveland Indian Baseball Club’s logo.

Some Caucasian fans understood the battle and told the protesters this fact while others informed the protesters to get a life and it’s only a character, it’s not real, it is a cartoon,  GET A JOB, so Mr. and Mrs. Caucasian Fan you have three hours to burn at a game yet you want protesters who have the same time to get a job. HMMMM interesting.

Let’s get this straight Chief Wahoo is a LITTLE RED SAMBO and that will never change. You can put a dress and lipstick on a pig and it’s still a pig.

Commissioner Manfred and the Cleveland Indians have a lot of work to do because the 2019 Baseball All Star Game will be at Jacobs Field-Progressive Field.

There are bright rays of hope with younger Caucasian Cleveland Indian fans (15-30) displaying and buying the new Indian gear without Chief Wahoo on it. They are sending a message to their minority friends; we are with you.

It is very interesting that this organization did not wear the Chief Wahoo mascot on the Independence Day Weekend nor at the Home Run Derby this year in Miami. The question should be asked why? The Cleveland Indian organization duns Chief Wahoo in certain cities and not in others.

The owner of the Washington Football Club, Dan Snyder has stated that he would never change the name. Cleveland Indian owner Paul Dolan stated that he is respectful of the critics, but he has no intentions to change Chief Wahoo at the present time.

Opening Day 2015 was the 100th year anniversary of the team becoming the Indians. Many Native American residents of Ohio greeted them with signs and protest. The 100th anniversary reignited the drive to end Chief Wahoo; the drive is not complete until this mascot is retired.

Cleveland players on the field have nothing to do with the mascot. Chief Wahoo never was and never will be the Cleveland Indians but this image keeps getting in the way.

Former Cleveland pitcher Luis Tiant (1964-1969) stated he felt uncomfortable wearing the uniform and made it known that racism is not kind.

The Washington Football Club name and the Cleveland Indian mascot must come to a close.