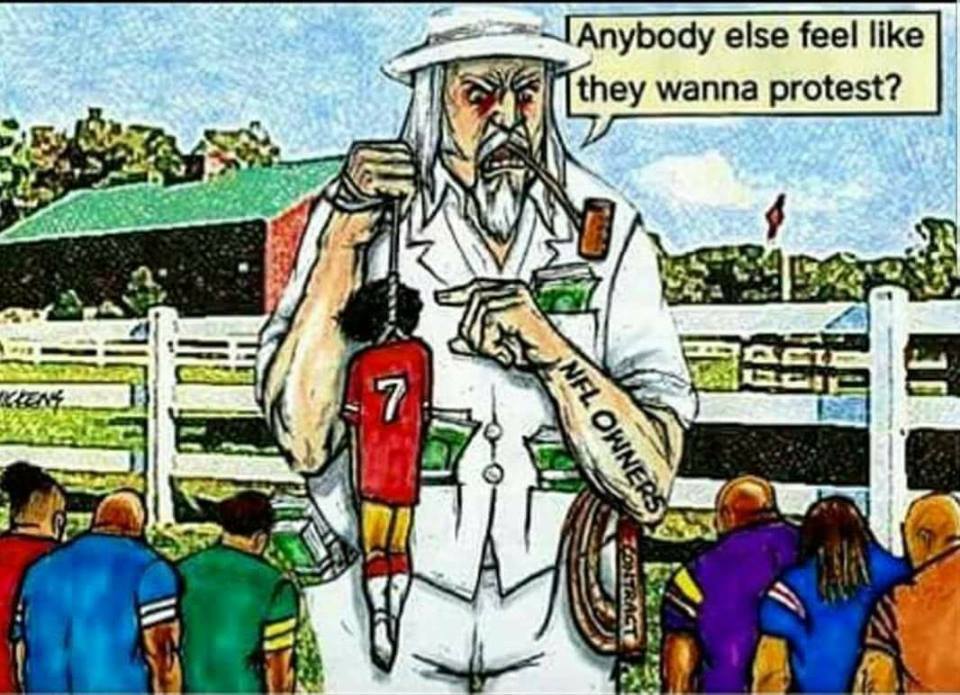 IT IS TIME TO BOYCOTT THE NFL AND THEIR PRODUCTS…. THE GIANT MUST BE BROUGHT DOWN TO SIZE …PLAYERS SUFFERING FROM CTE, PLAYERS BREAKING THE LAW AND LEAGUE RULES. THIS YOUNG MAN WITH A CONSCIENCE STANDS UP OR TAKES A KNEE FOR JUSTICE.

When we were all growing up our parents taught us that if you witnessed something wrong you were responsible to try to fix it. A young man from the University of Nevada-Reno is doing just that. Number Seven Colin Kaepernick has entered the history books of civil rights exposing the National Football League and the United States of America about their racial and political hypocrisies.

The United States of America currently is marching through another time warp back to 1969 protesting the American so-called new norm. Mr. Kaepernick could be following in the footsteps of Curt Flood, Rosa Parks, Tommie Smith and John Carlos, Kareem Abdul Jabbar, Muhammad Ali and The 1965 AFL All Star Team which demeaned the game be moved from New Orleans.

The double standard continues in the National Football League with the Miami Dolphins signing retired quarterback Jay Cutler who quit on the Chicago Bears. Cutler had a broadcasting job waiting for him, instead he will be on the field this fall in South Beach. The message was sent that the league did not want Colin Kaepernick on the field not because of his football talent but because of his political views.

Interesting that the New England Patriots can endorse the current President-number 45-Agent Orange- and nobody says a word, but Number Seven cannot request liberty and justice for all.

The NFL requested Mr. Kaepernick to be in shape and ready to play when called on, yet the Miami Dolphins signed a guy who had not touched a football or taken a snap from center since November of 2016. HMMMMMM…. I wonder where is DeMaurice Smith and the Players Union?

This team picked up a guy known in Chicago not to be a good teammate or manager of the team on the field. Nobody in the news media flinched, nobody in the football world asked why Cutler; it was business as usual.

This recent event tells the world what the NFL really thinks about Colin Kaepernick and his political stance… this is not about football anymore it’s about getting people in the stands. It’s about players conforming to the league norm whatever that is. The New York Football Giants made that clear by re-signing kicker Josh Brown knowing that Brown (allegedly) beat his wife for years.

I love football; however the treatment of Colin Kapernick illuminates a disturbing standard and trend in the United States of America.

12 ILLEGAL things you can do and STILL play in the NFL:

3 things you CAN do to CHEAT the game and STILL play in the NFL:

ONE LEGAL thing you CANNOT do and STILL play in the NFL:

It is all about the bottom line and making money. Former head coach Herm Edwards stated many years ago

“YOU PLAY TO WIN THE GAME.” It seems like half of the teams in the NFL have forgotten this goal or even care.

Mr. Kaepernick is not signed because of America’s racial insensitivity and general partisan closed-mindedness; this is in spite of his performance last season in San Francisco, an awful last place team. Colin had 16 touchdowns and only four interceptions. He had a 90.7 passer rating putting him 17th of 30 qualified starters ahead of San Diego’s Phillip Rivers, Arizona’s Carson Palmer and way ahead of New York Giant Eli Manning. DON’T TELL ANYBODY, and it is still not enough.

Kaepernick is kneeling for Philando Castile– Louisiana, Sandra Bland-Texas, Eric Gardner-New York, and Mike Brown-Missouri, he is kneeling for justice and truth in the murders of these African Americans. The conservative fan base and NFL owners do not like it and have made their voices heard. NOT HERE, NOT NOW.

Grown men, hard-core football fans will be coming out of their MAN CAVES in support for Colin Kaepernick this fall. For the first time in many football seasons the television will be turned off on Sundays and Mondays. For those who don’t know what a man cave is, it is a room full of television sets-each set has a different game on, food, beverages, and their favorite team’s football gear in that room.

In 2017 twenty-four free agents have signed with new teams and only three are African Americans. The point is half of these quarterbacks could not hold the jock strap of Number Seven on the field.

Here are the teams that are in need of a veteran quarterback – The Cleveland Browns, The Jacksonville Jaguars, Miami Dolphins, New York Jets, Denver Broncos, and Chicago Bears,

Here are just some of the names of free agents and starting quarterbacks for the 2017-18 season. Question, are they better than Colin Kaepernick?

Mike Glennon-Chicago Bears. Glennon has thrown for 30 touchdowns but has 15 interceptions in his short career.

Matt McGloin-Oakland Raiders -Philadelphia Eagles, McGloin has a 58.1 passing percentage with 11 touchdowns and 11 interceptions. Last year he had a chance to make a star for himself with a playoff game. He suffered a shoulder injury January 1, 2017, with 11 passes completing six for 21 yards in the first half of Denver Bronco game costing the Raiders the AFC West title and a first round bye.

Josh McCown-New York Jets- started 60 games and has 70 fumbles.  This guy gets a new contract. REALLY?

Mark Sanchez – New York Jets- Chicago Bears famous for his butt fumble which ESPN will not let you forget. If Sanchez had stayed at Met Life Stadium he would still be starting for Gang Green but as my friend Reggie Howell of WCLM AM 1450 in Richmond, Virginia would say, “I digress.”

Dan Orlovsky – Detroit Lions-Los Angeles Rams. In the Detroit Lions’ 0-16 season (2008).  Orlovsky, went into the end-zone for a safety when the Lions had the ball on their one-yard line instead of trying to run for a first down.

Nick Foles- Philadelphia Eagles- Foles has put a bright future for the people in the City of Brotherly Love. The Eagles have to put a line in front of him to protect him or he will become a wounded bird. The Eagles have moved away from the Black quarterback (Michael Vick, Vince Young, Donovan McNabb era) and have put all of its fate into Nick Foles’ hands the former backup to Alex Smith in Kansas City.

Blaine Gabbert- San Francisco 49ers- Arizona Cardinals – The man who Kaepernick replaced in the middle of last season. How did that work out San Francisco? Gabbert has 38 touchdowns, 37 interceptions with 25 fumbles; a below average quarterback who is just filling the position in Arizona.

Blake Bortles- Jacksonville Jaguars- This man is one of the worst starters in the NFL with a 79.6 Q.B. rating with 69 touchdowns in 46 games in three years. Bortles leads the anemic Cat offense which has been in last place the last three years. Yet Blake Bortles continues to start for the Jaguars. If the NFL wanted to hide Colin Kaepernick this would be the perfect place, Jacksonville.

Ryan Fitzpatrick- New York Jets-Tampa Bay Buccaneers. Had one of the worst Q.B. ratings in the NFL yet Fitzpatrick finds another job. Fitzpatrick had six interceptions in three weeks. Remember this man held out last year in pre-season training for another contract and demanded that he be a starter. Ryan got his wish and the New York Jets still have not recovered and Fitzpatrick is in Florida.

Matt Schaub- Atlanta Falcons- Holds the NFL record for most consecutive games with a pick six thrown, that’s an interception for a touchdown for the other team.

Kirk Cousins –The Washington Football Club- This is the best free agent of the 2017 class with his 93.6 Q.B. rating with 90 touchdowns, 42 interceptions and 24 fumbles in four years. Cousins seems to lose his form in the playoffs with 3 fumbles and two defeats in two years.

Ryan Tannehill and Matt Moore – Miami Dolphins – Tannehill has been in South Beach for over five years with only one playoff game. Sports analysts have stated repeatedly that this man would lead the Fish to the playoffs. Tannehill has played 77 games with 106 touchdowns, at the price of 66 interceptions and 45 fumbles at critical moments. The Fish must not believe in Matt Moore because they signed retired Jay Cutler from the Chicago Bears on Tuesday, August 8, 2017.

Jay Cutler -Chicago Bears- Miami Dolphins- Mr. Happy Face gets another job in South Beach for the time being. Question, when was the last time the Chicago Bears played in the playoffs? The answer, not with Jay Cutler behind center. Cutler’s career stats are 208 touchdowns, at the price of 146 interceptions and 32 fumbles with a 78.1 Q.B. rating.

Andrew Luck- Indianapolis Colts cannot forget the last great white hope. Andrew Luck was the first draft of the 2012 season. He was supposed to be the answer to the number one draft pick of 2011, quarterback Cam Newton of Auburn University who went to the Carolina Panthers. Luck was supposed to take over the spot of New England’s Tom Brady, Green Bay’s Aaron Rodgers, Pittsburgh’s Ben Roethlisberger, New Orleans Drew Brees, and New York’s  Eli Manning; it did not happen. Luck induces too many interceptions on critical drives. Andrew has a strong arm but he throws into zone defenses too many times. The past two seasons, Luck’s production has been interrupted with injuries. This could be his do or die year for Luck and the Indianapolis Colts.

Jared Goff- Los Angeles Rams- The next white hope from the Univ. of California Berkeley. It’s early yet. This is what the sports intelligentsia want behind center: a big strong tall man with pocket presence. Goff was projected to be the next Aaron Rodgers, another Golden Bear. The NFL wants to end the running mobile quarterback era and Goff is the perfect specimen.

It’s a shame that the National Football League allows players to be allegedly involved in a rape case, a homicide case, assault case, and be called out for domestic violence or be caught with drugs. Put on that uniform and let’s play football.

Take a knee for the National Anthem and for African American civil rights and justice, that’s another story, the football establishment continues to say we don’t want you on the field. Colin Kaepernick is making that point crystal clear because he is still unemployed as of August 2017 with pre-season in progress.

IT IS TIME TO BOYCOTT THE NFL AND THEIR PRODUCTS…. THE GIANT MUST BE BROUGHT DOWN TO SIZE …PLAYERS SUFFERING FROM CTE, PLAYERS BREAKING THE LAW AND LEAGUE RULES. THIS YOUNG MAN WITH A CONSCIENCE STANDS UP OR TAKES A KNEE FOR JUSTICE.