As the last week turns, let’s now size up how the West will be done… 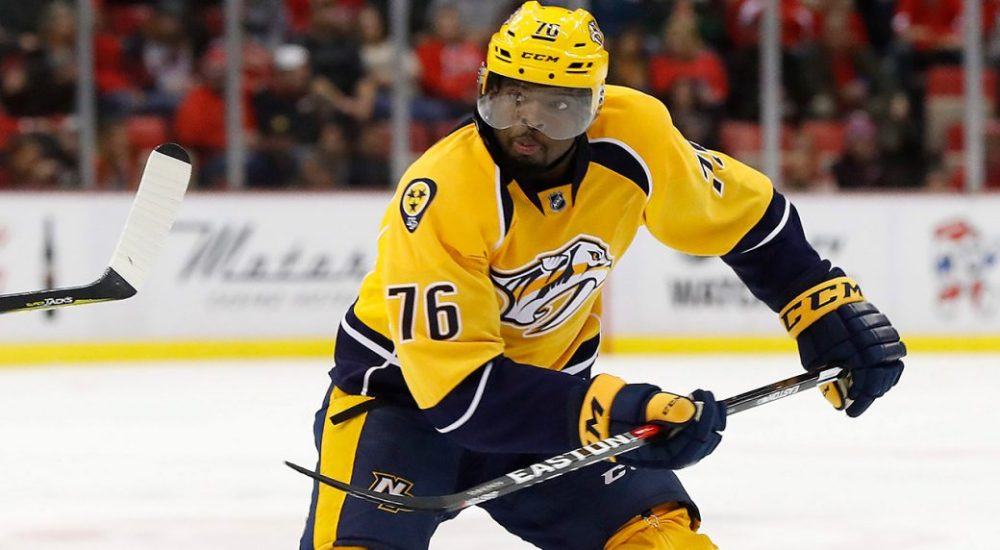 NASHVILLE PREDATORS (113 points, first place, Central Division, clinched)
The Nashville Predators are marching toward their second Stanley Cup Finals appearance. This is the best defensive team in the Western Conference. The recent call up of forward Frederick Gaudreau from the American Hockey League due to the injury to Viktor Arvidsson; this may alter the Preds’ offensive approach going into the playoffs.
Left winger Filip Forsberg is their leader on offense (61 points) – and there is strong balance with double digit points from almost every offensive player. 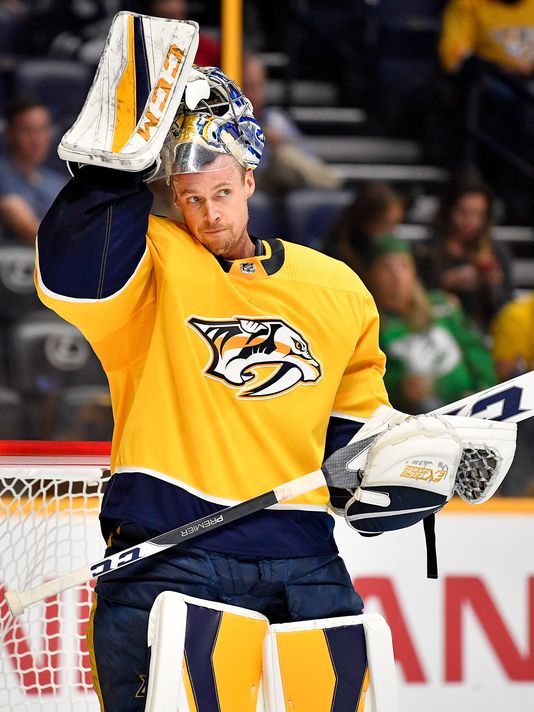 Goal Brother and All-Star P.K. Subban consistently takes on the best offensive opposing players – and gives as good as he gets with 58 points (42 assists) along with his wicked good slap shot from the point.
If Columbus’ Sergei Bobrovsky is the Beast of the East, Nashville’s Pekka Rinne makes a strong argument for Best in the West. Rinne was super in net with 41 wins, eight shutouts and a definite contender for the Vezina Trophy.
With Rinne and the best back line pairings in the League, Nashville is a major threat to return to the final.
Goal Brother X-Factor: P.K. Subban must shoot more on specials; finds lanes well and is very accurate, putting men around the net in good spots for rebounds. 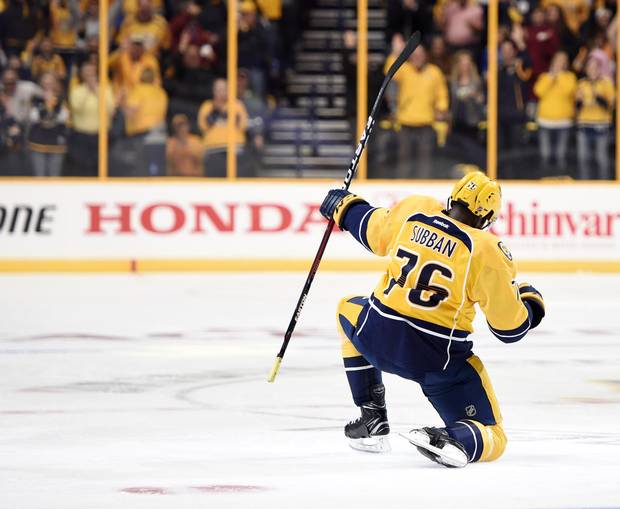 WINNIPEG JETS (110 points, second place, Central Division, clinched)
The Jets have finally put it together with an awesome blend of strength, speed and skill. Producing one of the deepest teams in hockey, Winnipeg flew past all obstacles to 50 wins – and their highest point total in history.
Jets aren’t only deep, they run four lines and their best line may be Patrik Laine, Nikolaj Ehlers and Paul Stastny. Captain Blake Wheeler guides this offensive train with a 30 – goal rookie in forward Kyle Connor and three other 20 – goal plus scorers to complement Laine’s 44 goals as the second coming of Teemu Selanne. 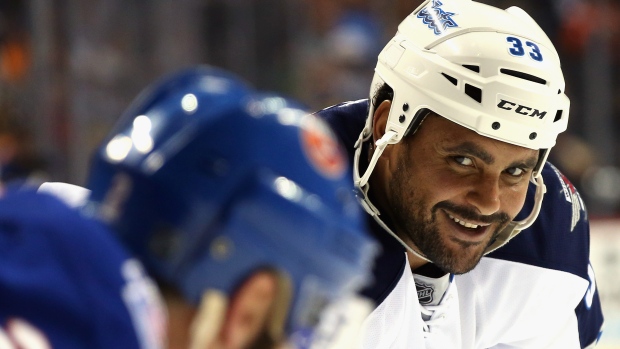 Injuries hit key players like Jacob Trouba, Mark Scheifele and Dustin Byfuglien – but Winnipeg never flinched.
Goalie Connor Hellebuyck has solved the problems in net; and a healthy Byfuglien provides fresh legs – and an unstoppable force on the blue line. 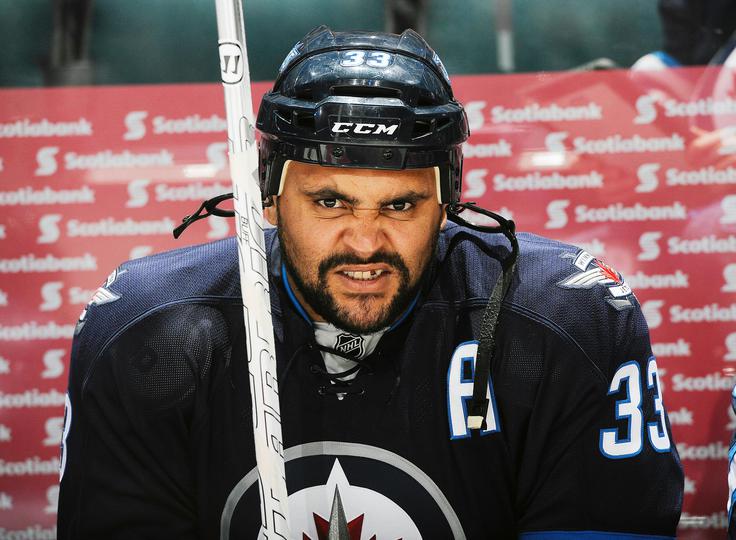 Goal Brother X-Factor: Because he always does it, it’s almost silly to say Big Buff must throw his weight around; but Byfuglien, when he gets steamed up, is a Cadillac Escalade on skates – mobile, agile and hostile – and he will need to be all that if a potential West Final with Nashville is in the offing.
LAS VEGAS GOLDEN KNIGHTS (107 points, first place Pacific Division, clinched)
The Vegas Golden Knights are the story of the National Hockey League. The Knights became the darlings of the league after the tragic mass shootings on October 1 of last year.
A few days ago, to honor those who lost their lives, the Knights retired # 58 – never to be worn by a Las Vegas hockey player. 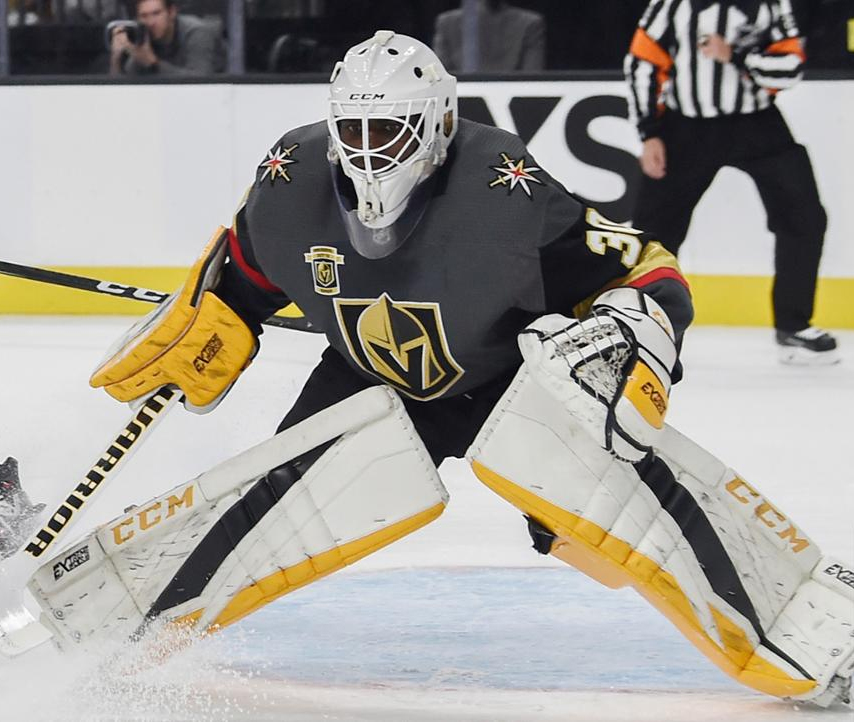 The team overcame many issues – six different goalies in net – in the first two months of the season! Marc – Andre Fleury was injured early and Malcolm Subban stepped in and stabilized the position until he became injured as well…
It was believed there were some assets scooped up in the expansion draft, but no one could have foreseen William Karlsson becoming a bona fide sniper with 43 goals; Johnathan Marchessault had been a 30 goal scorer formerly with Florida – and didn’t lose his knack for the net, potting 27 – and getting help from three other 20 – plus goal scorers gave Vegas the ability to counter when they were scored upon. On top of other amazing things this club has done, Vegas was shutout only three times all season! 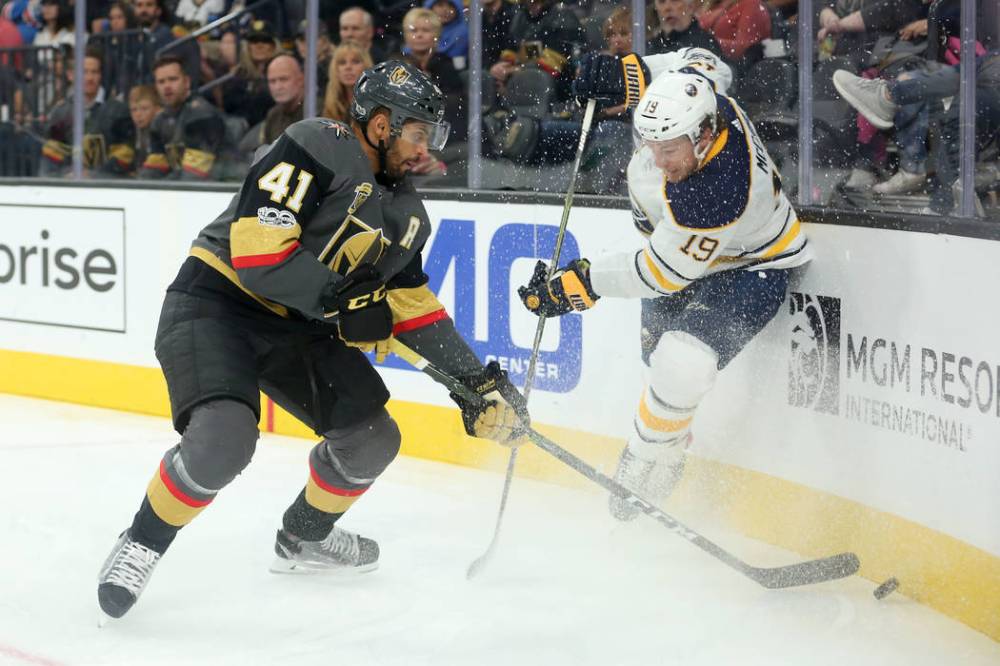 Pierre-Edouard Bellemare leaves Philadelphia where he played on a checking line to the west coast where he is enjoying time on the ice with his highest career point total (6G, 9A).
Riding Fleury as their workhorse, the Golden Knights broke all expansion team records. They are the first to ever wins 50 games, earn over 100 points, and first to win a division title since the 1968-69 St. Louis Blues. 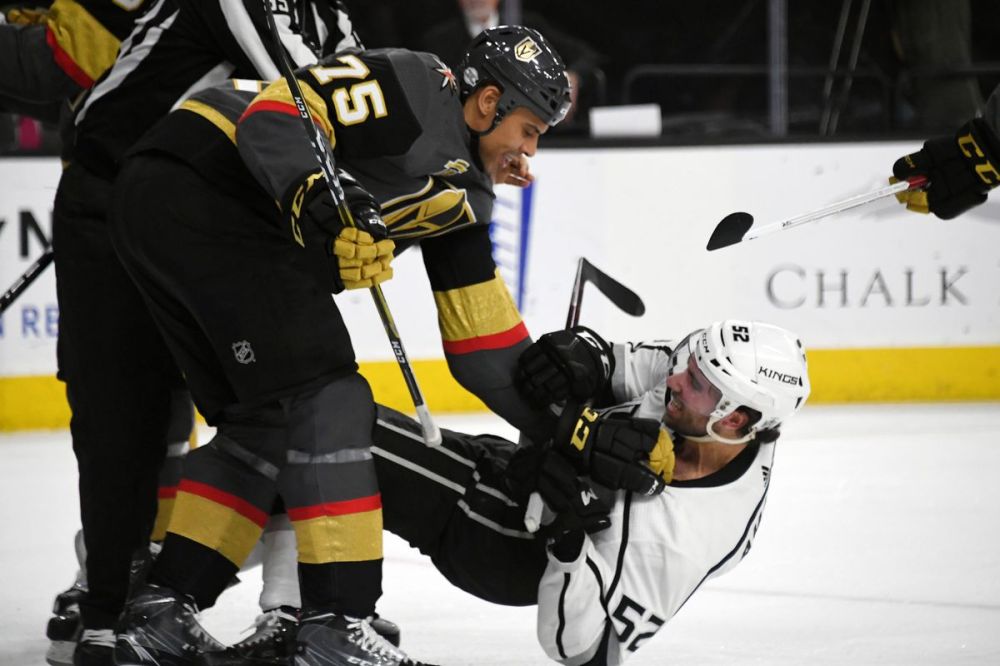 Goal Brother X-Factor: Bellemare’s yeoman work on the fourth line is appreciated, and the late season pickup of Ryan Reaves will keep other offenses honest with a touch of enforcer just in case Vegas does have to Knuckle Up…
Malcolm Subban, however, may be the key. As well as Fleury has played, there is a ‘book’ on how to beat him – which will be read like the New York Times when the playoffs emerge. Subban, who was 13-3 in the 18 games he played, was strong on home ice…
SAN JOSE SHARKS (98 points, second place, Pacific Division, clinched) 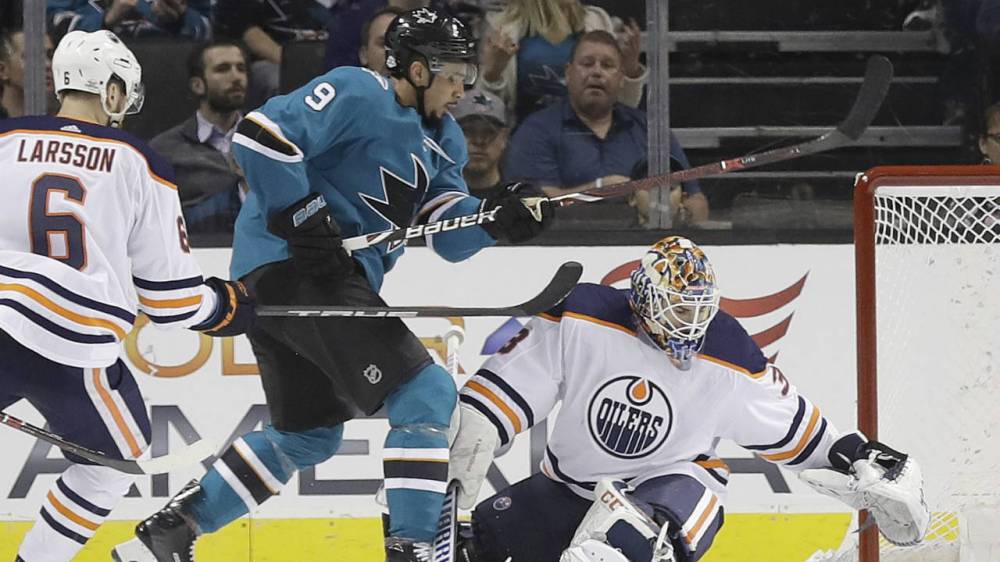 The San Jose Sharks, with the trade deadline acquisition of Evander Kane from the Buffalo Sabres, vaulted forward into the playoff mix; and the ‘Guppies’ now have real teeth in the offensive zone. Always a goal scorer, Kane’s physical style is similar to Philly’s Wayne Simmonds…
San Jose has gone 11-4-1 since the trade, and with Joel Ward back from injury to help out on the second and third lines, the Sharks have a legit shot to move on. 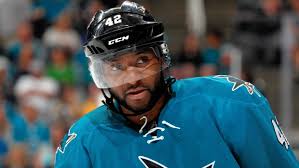 The Pavelski/Couture/Hertl line has to also explode in the playoffs to avoid that one-and-done. Still don’t know what to make of the Martin Jones/Aaron Dell tandem in goal, but Brent Burns is a stalwart for the Men of Teal.
Goal Brother X-Factor: Joel Ward is also returning from injury. Kane is wielding a hot stick, and if he remains so, Sharks can bite someone in the ass in the early rounds…
MINNESOTA WILD (98 points, third place, Central Division, clinched) 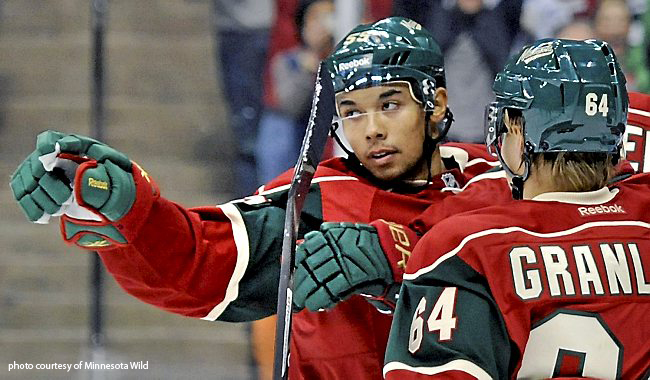 The Minnesota Wild are the quiet team that no one pays attention to. The ex-New Jersey Devils are keeping this team in contention. Forward Zach Parise has found a home in the Midwest, as firepower on the Wild is also supported with Eric Staal, Mikko Koivu and Matt Cullen…
The Wild’s defensive posture took a major hit with the Ryan Suter injury, but Matt Dumba will need to seriously grind to make up the loss. Not too sure about Devan Dubnyk in net, but we will find out very soon what he’s made of.
Goal Brother X-Factor: Dumba, like Suter, has great offensive capability. More ice time, more responsibilty – Dumba can handle this.
Livin’ on the Fault Line:
LOS ANGELES KINGS (96 points, two games left) ANAHEIM DUCKS (95 points, three games left)  COLORADO AVALANCHE (93 points, two games left) ST. LOUIS BLUES (92 points, three games left)
The Kings and those Dayyum Ducks have the wild card spots right now, and in all likelihood, it looks like it will stay that way. Even though it looks like sometimes the Kings are offensively challenged, Jonathan Quick (sorry, G) is my favorite goalie – and plays even better come Money Time…unlike the other goalies left, L.A. is always in a series when you have number 32, one of the greatest defensive last stands of hockey between the pipes. 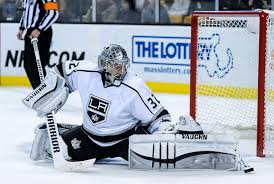 Their special teams are among the best, ranking second on the penalty kill. Then there is the old guard of Tyler Toffoli Anze Kopitar, Jeff Carter and Dustin Brown – and that valuable playoff experience.
The Kings end the season versus Minnesota and Dallas, while Anaheim will take on Minnesota, Dallas and Arizona.
The Anaheim Ducks are the West’s version of the team No One Wants to Play. Goal Brother J.T.Brown, a recent pickup should be playing more, but his political stance has hurt his career via his support of Colin Kaepernick… 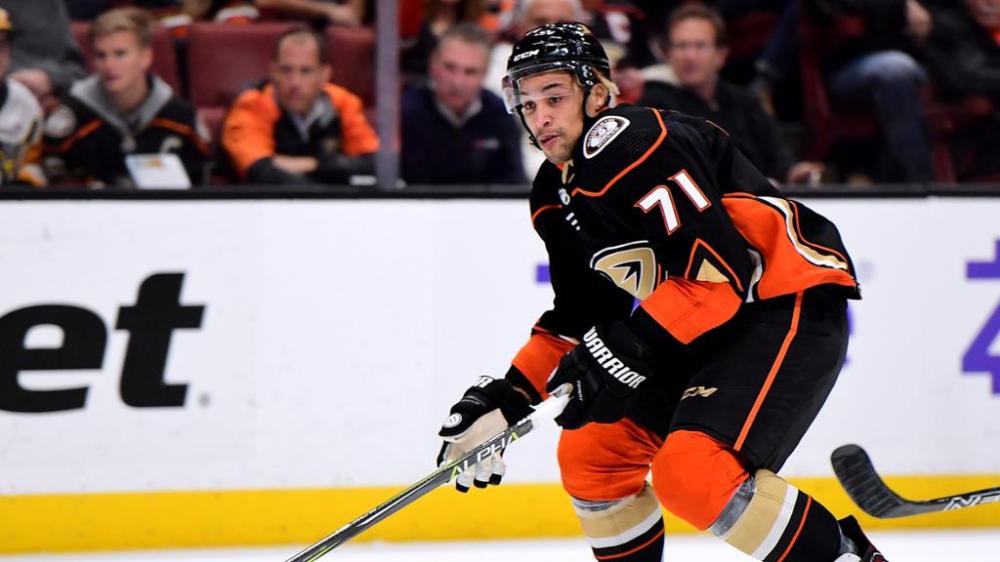 Strength up the middle with Ryan Getzlaf, Ryan Kesler and Adam Henrique has always been Anaheim’s stock and trade.
Forward Corey Perry is the soul of the team; he shows younger players what it means to be a Duck. That said, keep your eye of Patrick Eaves and sneaky good Jakob Silfverberg – those damn Ducks – are dangerous.
Their big forwards thump you consistently, and are harder to get rid of than in-laws; but the John Gibson injury could be crucial. Ryan Miller can do the job should Gibson be unavailable; Brown and his needed speed will be on the roster should Anaheim quack their way into the post – season…
For Colorado, Nathan MacKinnon must get some love. He has played his ass off, but Jonathan Bernier or Semyon Varlamov may not be enough in net. I think Andrew “the Hamburglar” Hammond is better than both of them, but I don’t think we’ll get to find out this season. This is one of those ‘lift the team up on your shoulders’ moments – what say you, Nate?
Proof of the Pudding as to how great this season has been sits in St. Louis, where one of the best prime time players, Bad Vlad Tarasenko, may get the freeze out. Jake Allen has been spectacular at times, and Brayden Schenn finally woke up (65 points) but if they can’t beat their arch-rival Chicago this evening, it’s a done deal.
always outnumbered…never outgunned.
basneditor@basnnewsroom.com
Copyright (c) 2018 Michael – Louis Ingram (c) PopBros 2018 – all rights reserved
welcome to the GLC the gray leopard cove
THE MUSIC BOX HOUR
www.blogtalkradio.com
www.blackathlete.com
www.batchelorpad.biz