OAKLAND, CA.-The movie “Black Panther,”  is the story about a king that ruled an imaginary land called Wakanda on the continent of Africa. The king T’Challa returns home after his father’s passing to rule the land.  Wakanda had extraordinary resources and powers to heal the world. The strong influence and power of the country’s females can be seen throughout the film with a song to support the ideas of the movie.

We must go deeper into the meaning of why it was a worldwide success and why Black America needed this even if it had to give some concessions. There is a secret that the father did not tell the son and that becomes the center of this film.

This film had to walk the European-American race tightrope at the same time promoting a Black Hero. In a strange twist the two white characters played off of each other in conflict -villain, Klaue played by English actor Andy Serkis and Martin Freeman the CIA agent-Everett Ross. 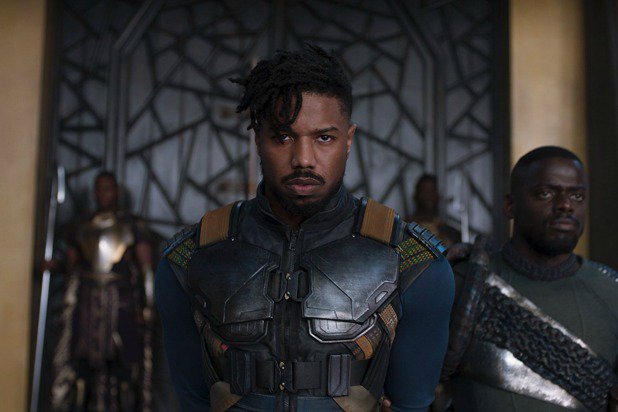 The film also had one rebellious Black soul named Eric Killmonger, played by Michael B. Jordan – the superhero villain energized the film and made viewers think.

This movie was a political and social backlash to the 2016 Oscar Award show, diversity did not exist in last year’s ceremonies and the Academy had to finally face the fact that they had a problem, Black Panther addressed this issue.

T’Challa was the Black superhero for the African American Millennial (1980-1995), a Black superhero around the world something that the Black Power Generation (1965-1980) did not have. The Black Power Generation had real-life heroes that walked the streets every day so Superman, Batman, and The Flash were distant images in comic books. Today we have mothers and fathers, uncles, and aunts that continue to be the Black communities superheroes.

Black Panther was the second biggest opening movie weekend in the United States beating out the Star Wars franchise movie, “The Last Jedi”. The movie industry once again had to be convinced that a majority-minority cast film would sell tickets and was not different and people would come to theaters on a worldwide base.

There is even a song for this new superhero “Pray For Me” by The Weekend with Kendrick Lamar. The music takes you back to the homeland, Africa and the lines with powerful words are awesome.

I fight the world, I fight you, I fight myself, I fight God, Just tell me how many brothers left, I fight pain, I fight hurricanes today I wept I’m tryna fight back tears flood on my doorsteps, life a living hell puddle of blood on the street.

Shooters on top of the building. government aid ain’t relief Earthquake the body dropped. the ground breaks. The poor run with smoke lungs and scare face.

Who needs a hero? – You need a hero, look in the mirror, there goes your hero, Who in the front line at ground zero.

My heart doesn’t skip a beat even when hard times bumps the needle. Mass destruction and mass corruption the souls are sufferin’ men Clutchin on deaf ears again rapture its coming, it’s all prophecy and if I gotta be sacrificed for the greater good then that’s what it’s got to be

Who gonna pray for me.

Remember the middle 1970s and the Black Action Films like Shaft, Super Fly, Cleopatra Jones, Get Christie Love, Black Fist, etc. what America called Black exploitation movies. The goal was to get Black people in the seats at movie houses all over the country. It is happening all over again with Black Panther but this time it is in movie houses around the world. This time the color in the seats does not matter. Black Panther passed the test.

Many thought that the king T’Challa-played by Chadwick Boseman had political, social, and economic ideologies of the current president of the United States, wanting to keep Wakanda closed to everybody to protect their precious metal called Vibranium and the heart-shaped herb that gave the king superpowers. Eric Killmonger wanted the world to know this secret and punish the world for the oppression in which he and Blacks lived under in the United States and Europe, the battle was on.

This movie gives power and grace to Black females as queens, warriors, and scientists something that America still refuses to admit already exist.

In the opening, the female warriors and guards welcome the king home: There is the very intelligent sister who loves science- Shuri played by Letitia Wright, and the beautiful and strong independent girlfriend-Nakia played by award-winning Lupita Nyong’o and we cannot forget the queen mother played by Angela Bassett. It also reviles the powerful and loving bonds between mother, daughter, and son. Viewers will also enjoy the light playful and respectful competition between the brother and sister.

It is a movie about the Black community without the evil and dividing forces of supremacy, bigotry, and prejudice. It is a movie of Black pride, leadership, love, and friendship.

It was a movie African Americans could feel good about themselves and their culture without the outside white noise (pun intended).

The film shows that leaving Black people alone would be a powerful and strong happy force that can create anything. America and Europe should listen to the message.

The only drawback to this movie is that it had to appeal to American and European conservatives and liberals so something had to be done to the villain Eric Killmonger even in a fantasy world he was a threat. Just like the real-life versions of Reverend Doctor Martin Luther King Jr. and Malcolm X in the 1960’s this was the same conversation King T’Challa and Killmonger had.

Go see this movie and relax your mind for two hours, but put your thinking cap on to receive the message.