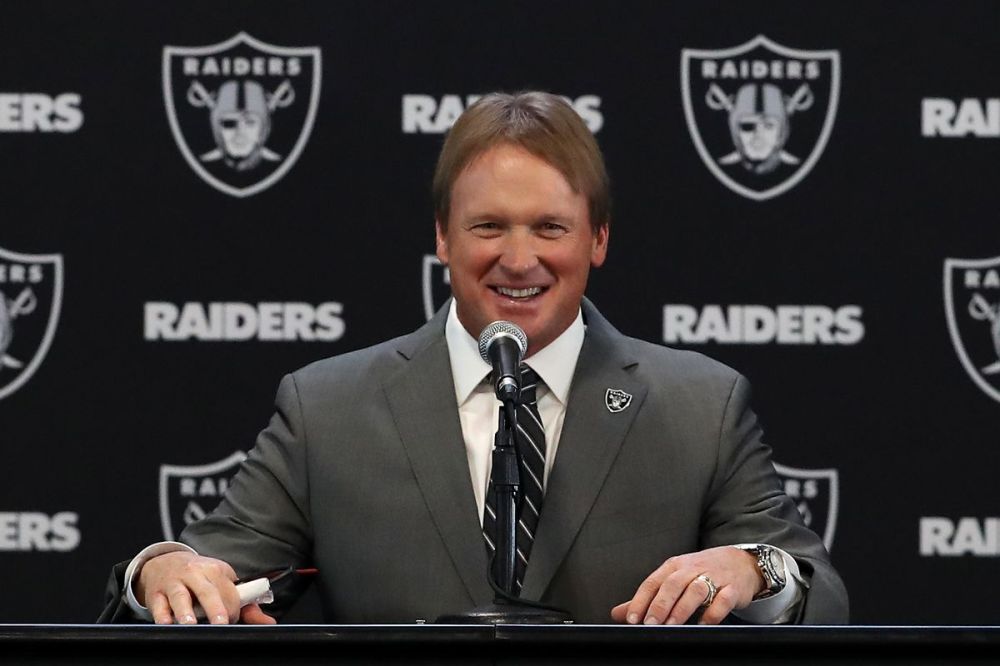 OAKLAND, CA.- — If the Oakland Raiders believe the return of head coach Jon Gruden will restore a dream already as old as the turn of the century, they may be awakening instead to the return of an unending nightmare.

With the turmoil on the field and the front office, Raider fans should be afraid, very afraid, of finishing last, not first. Two decades is an eternity in the National Football League, and the Raiders may now be condemned to a Gruden hell of their own making.

Already, under the guise of re-vitalizing and saving the Raiders, Gruden has seen the team become the oldest roster in the NFL, release an All-Pro punter to division rival Denver, fail to match the price for its best defensive player, dismiss 17 players who had been signed by general manager Reggie McKenzie, shun supporters of Colin Kaepernick’s politics, all while preparing to leave town for Las Vegas.

The Raider ownership may think “if only” they had kept Gruden as coach circa 2001, rather than letting him escape to Tampa Bay, where he beat the Raiders in the Super Bowl, with the Raiders playbook all in his head so deeply he even impersonated Raider quarterback Rich Gannon for the pre-game scout team, it all may have been different, for almost the past two decades.

The Gruden stamp on the Raiders may be nothing more than the evil grin of Chucky.

This spring, the Raiders opened their arms for the return of head coach Jon “Chucky” Gruden. He coached the Oakland Raiders at the turn of this century making them a defensive force and a playoff team, before moving on to Tampa Bay and winning the Super Bowl against the Raiders.

Many fans have stated and believe that Mr. Gruden stole the playbook and used it against his former team. Some Raider fans still have not forgiven or forgotten Chucky. They are now having a difficult time with his return to the Bay Area and his recent roster moves to put the Gruden stamp on this team.

The Raiders have been flirting and floundering with the playoffs the last five years without success; hiring Gruden in the organization mind would put them over the top in the AFC. It’s not working.

Within seven months the Oakland Raiders became the oldest team in the AFC West. They continued this nonsense this week by signing defensive tackle Ahtyba Rubin from the Atlanta Falcons and Frostee Rucker from the Arizona Cardinals. 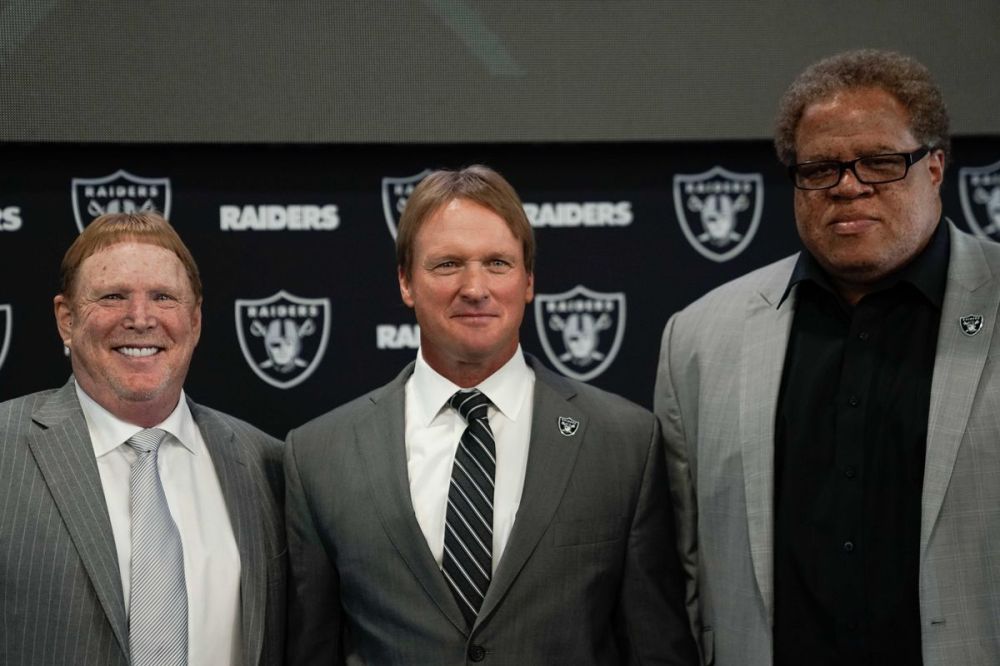 Hiring the former head coach, the so-called quarterback guru, and Monday Night Football broadcaster Gruden started an all-out assault on one of the few Black General Managers in the league, Reggie McKenzie. Gruden dismissed 17 draft picks of McKenzie in four months seizing control of the organization.

Most sports fans know new head coaches want individuals on the bench that he can work with and are on the same page. Gruden has extended that edict to the players on the field this year. The Raiders have had 12 years of practice doing this with the former head coaches, Lane Kiffin, Tom Cable, Hue Jackson, Dennis Allen, Tony Sparano, and Jack Del Rio.

Owner Junior Davis, Mark, “Little Al,” might be sending a message to the team with this move. Get your act together or you will be leaving the Bay Area.

These subtle acts also informed the league that Oakland might be having money issues after signing starting quarterback Derek Carr to a multi-million dollar multi-year contract and not signing All-Pro defensive linebacker Khalil Mack to a similar contract.

This is forcing the team into dreadful decisions including the future move to Las Vegas.

Gruden arrived in the Bay Area and immediately released All-Pro punter Marquette King to the Denver Broncos in April. King continued the historic legacy of Raider kickers in a Black and Silver uniform so the question needs to be asked why Gruden released King?

Most teams would love a guy that could pin teams within the 10-yard line. King did this just as other past Oakland kickers like Hall of Famers Ray Guy, and George Blanda, as well as Sebastian Janikowski, and Jeff Jaeger.

The next question is why release King to your biggest rival in the AFC West, The Denver Broncos and why to a place that is a kicker’s paradise with the high altitude. Gruden finally stated that King’s personally would not fit the current team’s direction.

WHAT???? After 12 years in a Raider uniform and a multiyear All-Pro, he is gone.

Gruden did not insert elder statesmen running back Marshawn Lynch limiting his playing time in pre-season games. This could sound the death knell for number 24. Lynch has been a silent supporter of the Colin Kaepernick-NFL flag, anthem, kneeling issue. Gruden does not like anything political around him so Lynch could be the odd man out.

Gruden gave up on the third round draft pick wide receiver Martavis Bryant from the Pittsburgh Steelers early. Maybe because of a possible suspension, Gruden does not like question marks on his roster and Bryant had to go.

Gruden let quarterback E.J. Manuel from the Buffalo Bulls get away after a great pre-season with four touchdowns, no interceptions, going 40 for 56 and 455 yards. The only problem may have been his four fumbles this summer.

The Raiders now had a decent running backup quarterback in Manuel. NOT, the Raiders settled for the human statue A.J. McCarron. So now if starter Derek Carr goes down and out for any length of time the Raider offense is history. With Manuel under center, the Black and Silver had a chance, with McCarron they are toast. 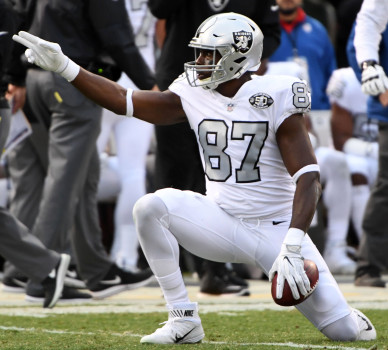 It is very interesting that the Raiders released tight end Jared Cook. Cook was one of the St. Louis Rams players who took part with the on-field protest (Hands Up Don’t Shoot) against police brutality and racial injustice in 2014. This act has Gruden’s fingerprints all over it.

This trend continued with the most recent release of defensive end Khalil Mack last week the best defensive player in a Raider uniform, getting little or nothing in return from the Chicago Bears, one needs to start questioning the roster moves of new head coach Jon Gruden.  Mack was the Oakland Raider defensive team leader and a very strong Black man. HMMMMMM!!!!!

These are just a few of the questionable moves made by the Oakland Raiders these past few months and it seems like they do not know where they are going or what they are doing with this roster. A squad full of rookies and a bunch of aging veterans. This is a very bad combination to create a championship team. 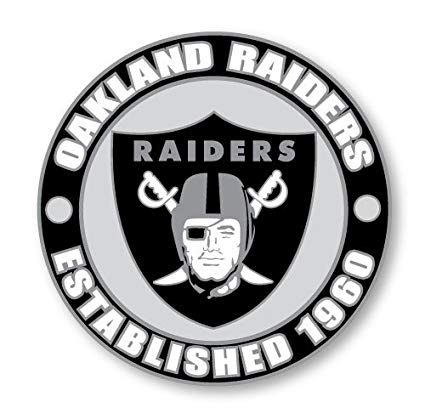 Remember the old Oakland Raiders were the Bad Boys of the league the NFL version of the Wild Bunch, Butch Cassidy and the Sundance Kids maybe just maybe the league told Mark Davis and the Black and Silver organization to clean up its act before moving to Sin City-Las Vegas, Nevada, a very conservative state. Sending in the new Sheriff in town Jon Gruden to tie up loose ends and release all of the old Black and Silver rebels.

The National Football League is currently down to four Black General Managers with this year’s firing of Cleveland Browns Sashi Brown, the youngest.  McKenzie could be next on the chopping block before the Oakland Raiders move to Las Vegas.

Hate to inform the Black Hole, but this year’s Raiders team could be a repeat of the Philadelphia Eagle disaster under the leadership of head coach Chip Kelly years ago, who released players at will he did not agree with politically and socially.

Jon Chucky Gruden has a very short window to win before the team leaves the Bay Area.

Don’t be surprised if the Oakland Raiders end up in last place in the AFC West with this turmoil in the Black and Silver locker room and front office.

P.S. The City of Oakland will be taking the Oakland Raiders to court with a law suit.