The United States of America has had an issue with race ever since its beginning in the late 1600’s when Blacks were considered as property and or slaves, Native-Americans were savages, Asians and Latinos just did not count.

This country has had some radical racial swings from right wing to left wing political thought and back again. This country once again is wrestling with the issue of race with Black sports and political figures taking the lead in civil rights.

The love-hate relationship continues with African-Americans and the American public.

America is fighting with its self as they crowned a Black Miss America last week: New York’s Nia Franklin. Ms. Franklin is a beautiful Black woman on her talent, intelligence, and style.

Most would say this was progress but the fight continues. 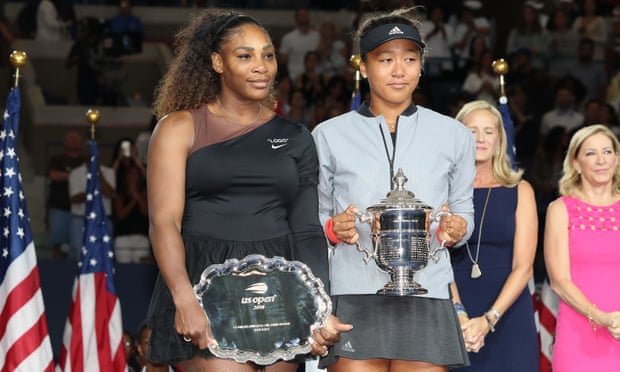 At the same time, America falls back into its old habits, bashing African Americans and verbally beating up the best athlete in America — Serena Williams. The Black female tennis star blows off steam in a tennis match and the whole world loses their collective mind.

Williams lost a match to her mirror image young Japanese-Haitian Naomi Osaka in New York for the U.S. Open Championship. We have seen this anger before with white male tennis players like John McEnroe, Jimmy Connors, Novak Djokovic (who won this year’s U.S. Open this year), and Ilie “Nasty” Nastase. These men can curse out an umpire, or throw a racket at the chair and receive a little verbal reprimand, all of this with little anger toward these men by the American public.

Boys will be boys, right? It is funny, right?

An Australian newspaper, The Herald Sun tried to make fun of Serena Williams’ anger with a cartoon and it looks like it came right out of the racist sambo era. This is what African American Athletes have to deal with every day.

Not only that it made Naomi Osaka white with blond hair. REALLY Osaka is Haitian-Japanese and is also of a darker hue.

But when a Black female or male does this same emotional outburst it is different. When a Black man or woman defends him/herself or his/her community he/she gets criticizes, ostracizes, and bashed from American society.

Curt Flood felt the wrath of American baseball fans when he went to court to fight his trade from the St. Louis Cardinals to the last place Philadelphia Phillies. How dare Flood challenge the notion that players were property and owners can send you where-ever they wish.

Flood was not happy and wanted the world to know this was not going to work.

This American “stay in your place,” notion happened again in New York City two weeks ago with Serena Williams on the court. The Chair was telling Serena to be quiet and play. I’m in charge here not you.

It happened in 1968 to Olympic track stars Tommie Smith and John Carlos. It happened to The Greatest of All Time, Muhammad Ali in 1969 and it happened to Curt Flood and LeBron James. The question should be asked WHY?

America is fighting itself because it has a leader that fans the flames of racial discord and descent. Mr. Trump has gone after the National Football League over the past two years which is predominantly staffed with African Americans.

This President has attacked African American former San Francisco quarterback Colin Kaepernick for his stance on justice, equality, and trying to stop police brutality, something that all Americans should be trying to do.

Mr. Trump now turns his guns on the Nike Sports Company for honoring Kaepernick and his justice stance. Amnesty International could not be far behind Trump’s wrath by giving Colin the Ambassador of Conscience Award.

Kaepernick could not get a starting job for any other team and the majority of the players that knelt with him in 2016 cannot be found on the field today.

America has done it before with the heavyweight champion of the world Muhammad Ali, by stripping him of his title world championship title because he would not go to war in Vietnam.

It happened with John Carlos and Tommy Smith for standing on the podium of the Summer Mexico Games with their fist raised in protest and bare feet in solidarity with American’s poor residents. They were sent home after winning Gold and Bronze for the United States

It also happened with Curt Flood in 1969 challenging Major League Baseball’s reserve clause now its Kaepernick’s turn. Black and visible personalities do not tread on the American Flag or its traditions.

America fights with itself when they embrace Ali after he becomes disabled and is no longer make political statements;  they embrace Carlos and Smith 50 years later as both of these track stars could not find a job and be shunned by this country.

Baseball is still fighting with the image of Curt Flood and free agents. Flood never played for the Philadelphia Phillies after winning a pair of World Series titles in St. Louis. America in time will finally embrace Curt Flood as well as Colin Kaepernick but the road will be long.

But we all need to ask why does America keep repeating itself?

They want a George Foreman waving a mini American flag in the middle of the boxing ring at the 1968 Olympics in Mexico. Negroes that will not or cannot protest against America.

This is nothing new Francis Scott Key went with the American tradition of blasting Black people. Key did not like the Black British Marines and made it known in the Star Spangled Banner.

These Black British Marines were fighting for their freedom in 1812 – 1814. Key wrote the third stanza about his disdain toward these Black warriors. At the time, Key was a landowner, slave owner, and tried at every possible opportunity to jail free Blacks even when a crime against these free Blacks was committed by Caucasians.

As a lawyer and the District Attorney of Washington, he could do it. Key fought for Slavery and against Abolitionists.  Key did not care, he was a stone-cold racist stating that Blacks were “A distinct and inferior race of people, which all experience proved to be the greatest evil that afflicts a community.”

America is doing it again with the current administration in Washington with sports figures as the political backdrop. Key made it known that he wished ill will toward the enemy be they Black or white.

The current administration in Washington D.C. is just following suit.

And where is that band who so vauntingly swore, That the havoc of war and the battle’s confusion A home and a Country should leave us no more? Their blood has wash’d out their foul footstep’s pollution. No refuge could save the hireling and slave From the terror of flight or the gloom of the grave, And the star-spangled banner in triumph doth wave O’er the land of the free and the home of the brave.

This stanza was written over 200 years ago and these feelings are still present in the United States. Are we a better nation today, an improved nation today, maybe, but we have work to do when a 36-year-old Black female tennis star can upset a nation over a single tennis match?

When a boxer can make Americans angry for not defending our nation, or when a basketball or baseball player exercises his right as a free agent to move to any team he wishes. Still it is all because of the color of the skin not the content of their character.

The Reverend Dr. Martin Luther King Jr. would not be pleased.

AGAIN, REMEMBER WHO IS TELLING THE STORY!!!!

One thought on “AMERICA IS IN A RACIAL QUANDARY — AGAIN”