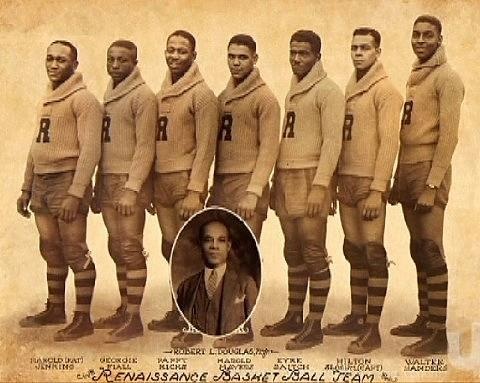 OAKLAND, CA.- This is the secret the NBA does not want America to know; the creation of the first all-black professional basketball league which later would be named the Black Fives.

This league had a championship from 1906-1927. From the first The Smart Set Athletic Club of Brooklyn to the Harlem (New York) Renaissance Big Five-(Rens).

The player war between the (NBL) National Basketball League and the (BAA) Basketball Association of America almost killed both professional leagues, while the Black Fives had to set out and watch because of the gentlemen’s agreement by the owners to block Black players on the floor, just like the NFL, NHL, and MLB.

The BAA played in the larger cities of America while the NBL suited up the smaller towns like Fort Wayne, Sheboygan, and Akron. By the 1948-49 season, the BAA had begun to attract some of the country’s best players, and four NBL franchises (Fort Wayne, Indianapolis, Minneapolis, and Rochester) moved to the BAA, bringing their star players with them.

DePaul’s George Mikan, the biggest attraction in either league who by himself could virtually assure a team’s success, defected to the new league with the Minneapolis Lakers. Both leagues lost teams and by 1947 the NBL needed the Rens to balance the Eastern Division.

African Americans were still banned from the professional game of basketball until 1950 even though the New York-Dayton Rens all-Black team replaced the Detroit Vagabond Kings in 1948.

Historical records state that the National Basketball Association did not integrate until the 1950-51 season so the Rens-Kings were two years ahead of schedule and African American owner and head coach Robert Douglas kept knocking on the door.

They were amateur, semi-pro, and professional teams sponsored mostly by churches, athletic clubs, social clubs, and Black YMCAs. The basketball equivalents to baseball’s storied Negro League were the Philadelphia Panthers, the Los Angeles Red Devils, the Washington 12 Streeters and many more, including the historic New York Renaissance aka Rens.

The Rens, from 1923 to 1948, won a dumbfounding 2,588 of 3,117 games and whose watershed rivalry with all-white Original Celtics (of New York) helped put the entire team in the Hall of Fame.

The financially strapped Detroit Kings gave the Rens a 2-17 record when they entered the league as they merged before warming up in the 1948-49 season.

It did not last long because the Dayton fan base did not support or like their new team, because the team did not look like them and played a speed up version of the game.

The New York-Harlem Rens played to sold-out crowds as they barnstormed all over the east coast. The majority of the players did not like the idea of inheriting the Kings losing record but the owner and head coach, Douglas made that decision.

The lily-white BAA used the newly formed all Black Globetrotters to attract crowds but refused to let them in the league. Owner and Coach Douglass wanted no part of being another circus team before the regular game.

In the 1949 season, the two leagues finally merged to form the current National Basketball Association. It did not include the New York-Dayton Rens- Detroit Vagabond Kings; three owners blocked the door for African American players AGAIN…

History would have been different if the Rens had stayed together and made the playoffs in 1947-48. The owner split the squad and The Rens never had a chance with racism, economics, and 17 loses.

Head coach and owner Robert Douglas dream had finally come true, African Americans would suit up and play in the NBA.

One thought on “BASN Classics: Looking Back at The 1948-49 Dayton Rens”