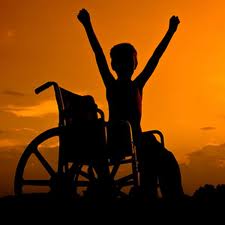 “The disabled moment” is a flashpoint in time, when disabled African-Americans become self-aware of their oppression and wake up to what they must do to overcome that oppression.

That moment occurred for Willie O’Ree, Wilma Rudolph, and Shaquem Griffin. It also happened for Curtis John Pride and a historical host of others as chronicled in the paragraphs below, and every disabled person who rises up.

Caucasians do not embrace the Black disabled because of their skin tone while African-Americans do not embrace this group because they are disabled and different. The Black Disabled community is still on the outside looking in. Like my disabled brother and freedom fighter, Leroy Moore states many times. “The Black Disabled community are on the outskirts, the outskirts of American society.”

Disabled President of the United States, Franklin D. Roosevelt could have lifted the disabled community by his leadership, he did not. FDR chose to hide his polio and his full leg braces. We are all still paying the mental cost of this “disability invisibility” today.

Black disabled athletes not only had to beat opponents they had to also beat racism to find their spot in the sports world. Disabled athletes had to wait their turn until their Black able-bodied equivalent to break the color barrier. There is at least one star in each major sport that has overcome major obstacles to become a winner.

Olympic Champion Wilma Rudolph contracted polio as a child and had a very difficult childhood. One leg was shorter and twisted so Wilma wore a heavy leg brace.

Many thought she would not survive her teenage years because she was always ill. Doctors told her that she would never walk normally, but Rudolph defied the odds. Rudolph was a fighter. Rudolph was a runner and she wanted to beat her siblings at everything.

Her mother told her you have to keep up with your brothers and sisters and you have to beat your classmates because you are different. Wilma did not know what to do because it took her longer to walk to and from school each day.

Right then was her disabled moment. She decided that she would run to school every day and beat her siblings and classmates to school. This personal decision made her the best female runner in the world, beating world-class runners in the 1956 and 1960 Summer Olympic Games. She did this breaking World Track Records and became the first woman to win three gold medals at one Olympics.

The disabled must conform to the able-bodied world of rules when the non-disabled rules are already stacked against them. The same can be said about disabled African-American players as they have to be three times as good as their white counterparts to even play the game they love. 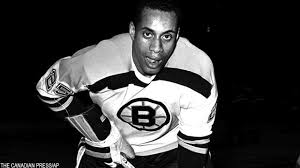 Willie O’Ree, the first black hockey player in the National Hockey League, had a similar moment in his career. Playing in a sport that did not have Black players he knew he had to be a strong individual. This continued when he was told he would never see out of the eye that was struck by a flying puck.

His decision to play or not to play was the turning point in his life, his disabled moment. Mr. O’Ree went back to the Boston Bruins never telling a soul about his disability. Changing the way he played the game protecting the good eye.

Not telling the Boston Bruin management that he was legally blind in one eye. This was a very dangerous decision because it could have cost him his eyesight for life. There is now an NHL rule that if a player lost vision in one eye he could no longer step on the ice.

O’Ree is now the current coordinator of the NHL Diversity Program and the Ambassador to the sport of hockey in the inner cities. The National Hockey League currently dresses 32 Black players, this would have never happened without the courage and strength of Willie O’Ree in 1960. 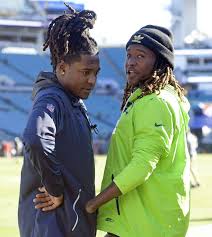 The two brothers made a pact in their younger years (8 years old) that they would play together on the same team in the future. IT HAPPENED!!!! That was their disabled moment.

Shaquem created his own way of catching the football and tackling the opponent on the field with one hand, targeting the middle part of the body of the runner. Many teams in the NFL did not take that chance drafting Griffin because they thought he would be a liability on defense. Shaquem blew way all the scouts with his talent at the pre-season combine breaking speed records and tying his brother in the 40-yard dash.

In the Griffin household the words disabled and handicapped were never used or accepted because it did not exist in this family’s vocabulary.

His brother and father designed football equipment for Shaquem to practice. It worked because he got stronger and faster each year. That pact took both young men to UCF the University of Central Florida and the Seattle Seahawks

Dodger Hall of Fame catcher Roy Campanella was the first disabled coach in Major League Baseball history. Every spring, Campanella would travel with the Dodgers to their spring training camp in Florida.

Campy’s career was cut short because of an automobile accident in 1958 which left him paralyzed from the neck down and used a wheelchair for mobility the rest of his life.

After his playing career, Campanella remained involved with the Dodgers. In January 1959 the Dodgers named him assistant supervisor of scouting for the eastern part of the United States and special coach at the team’s annual Spring camp in Old Dodgertown, South-Vero Beach serving each year as a mentor and coach to young catchers in the Dodger organization.

He would help the young catchers on the art of defense behind the plate. Whenever a team member had a problem they would visit Campanella. He used his disability to help others with words of wisdom and words of experience.

Campanella filled the role that many intelligent disabled Americans fill, that of counselor, comforter, and best buddy.

THE EFFECT OF NAZI GERMANY

The term “deaf and dumb” came from the Nazi regime. It has stood the test of time and American society still uses this horrible phrase. Deaf people are not dumb.

Just ask deaf 2014 Super Bowl Champion Seattle Seahawk running back Derrick Colman. Colman was the first Disabled African-American to play in the National Football League. He was a walk-on for the Minnesota Vikings in 2012 before moving on to the Seattle Seahawks. Colman currently plays for the Arizona Cardinals.

Derrick became famous after the 2014 Duracell battery commercials in which he uses for his hearing aids, many other deaf Americans switched to Duracell because Colman was the spokesperson for the company

Or the Atlanta Brave deaf outfielder Curtis John Pride who is now the head coach of Gallaudet University.  Baseball player John Curtis Pride was drafted by my beloved New York Mets; and also played for the Montreal Expos, Detroit Tigers, Boston Red Sox, and finally the Atlanta Braves during his career.

When Pride came back to Montreal, the Expo crowd gave him a ten-minute standing ovation because they loved the way he played the game and helped the disabled community of Eastern Canada.

Basketball star Mike “Stinger” Glenn, the Southern Illinois University Saluki great and all American guard grew up with two parents that were deaf. He learned sign languages at a young age; he also understood the difficulties his parents experienced.

The New York Knick-Atlanta Hawk promised his parents that he would help deaf children whenever he could. The former (NBA) National Basketball Association player opened a camp for deaf children. He taught many at Southern Illinois University – Carbondale the art of communication in (ASL) American Sign Languages.

During his playing career, Glenn requested the NBA to broadcast their games with Closed Captioning. Today, most sports broadcast are closed-captioned for the hearing impaired thanks to Glenn’s effort.

Now deaf basketball fans can enjoy the game like everyone else.

THE SPECIAL OLYMPIC AND PARALYMPIC GAMES

The Special Olympic Games lost two of their heroes with the passing of founder, Eunice Kennedy Shriver, and her husband Sergeant Shriver at the turn of this century.

Many African American Disabled Americans never played organized sports until the late 50s-60s because they were never given that opportunity, the Kennedy-Shrivers opened the door.

In 1960, the Kennedys and Shrivers wanted Black and white mentally challenged children to compete and meet new people. When it started 65 years ago only half of the stadium in Boston filled up and most were just friends and relatives of the children competing.

Today over 210 countries participate in these games and the stadiums are full of sports fans. The Kennedy-Shriver families are the second positive force for the disabled community in the field of disabled sports.

The same expansion of the Paralympics Games, known as the Stroke Mandeville Summer Games in 1948. The majority of these participants were World War disabled veterans coincided with the International Wheelchair Games both groups would later join forces to become the present day Paralympics Games.

In 1976, the first Winter Paralympics Games were played in Sweden. Black and white athletes now meet every four years to win gold medals just as their non-disabled counterparts. The fight continues to be accepted in the sports world with these world games.