Skip to content
Posted on February 3, 2019 by Tee Mack

The Alliance of American Football will launch its inaugural season on Saturday, February 9 and fans will be able to experience all game action on NFL Network, CBS, CBS SN, TNT, and B/R Live.

The Alliance is proud to partner with top media programs in order to bring more football to fans this season. Following The Alliance’s opening weekend, NFL Network will air two games per week in prime time on Saturday and Sunday night.

“Having live football games on NFL Network in February, March, and April will be a great addition to our lineup and a nice complement to our coverage of the NFL Combine and NFL Draft,” said Mark Quenzel, Senior Vice President of Programming and Production at NFL Network.

The Alliance of American Football opens its inaugural season the weekend of February 9-10, with a pair of games on both Saturday and Sunday.

CBS will air the league’s debut game on February 9, one week after the network airs Super Bowl LIII. The network will also carry The Alliance’s championship game from Las Vegas on April 27. One regular-season Alliance game will air exclusively on CBS Sports Network each week, as well.

“As The Alliance of American Football launches next February we are excited to become the official television partner, adding more football to our robust programming line-up with a great package that includes two prime-time games on CBS, as well as a full slate of regular-season spring football on CBS Sports Network,” said CBS Sports Chairman Sean McManus. “With Charlie Ebersol and Bill Polian at the helm, we are confident that the product they will deliver will be entertaining, exciting, engaging and something that fans will really enjoy.”

Turner Sports and The Alliance of American Football have announced a multi-year, cross-platform partnership that will include live event coverage extending across a combination of Turner Sports platforms TNT and B/R Live, Turner Sports’ premium sports streaming service.  TNT will exclusively televise one Alliance regular-season game and one playoff game each season throughout the length of the agreement, with additional regular season games available weekly via B/R Live.

“This is a true partnership and The Alliance will have our full support in the distribution of its live game coverage and content across the Turner Sports portfolio,” said Lenny Daniels, president of Turner Sports.

About The Alliance of American Football

Led by some of the most respected football minds in the game, The Alliance of American Football is top-flight professional football fueled by an unprecedented Alliance between players, fans and the game. Founded by TV and film producer Charlie Ebersol and Hall of Famer Bill Polian, The Alliance features eight teams with 52-player rosters playing a 10-week regular season schedule beginning February 9, 2019 on CBS, followed by two playoff rounds and culminating with the championship game at Sam Boyd Stadium in Las Vegas on April 27, 2019. Additional broadcast and distribution partners include Turner Sports — TNT and B/R Live — as well as the NFL Network. 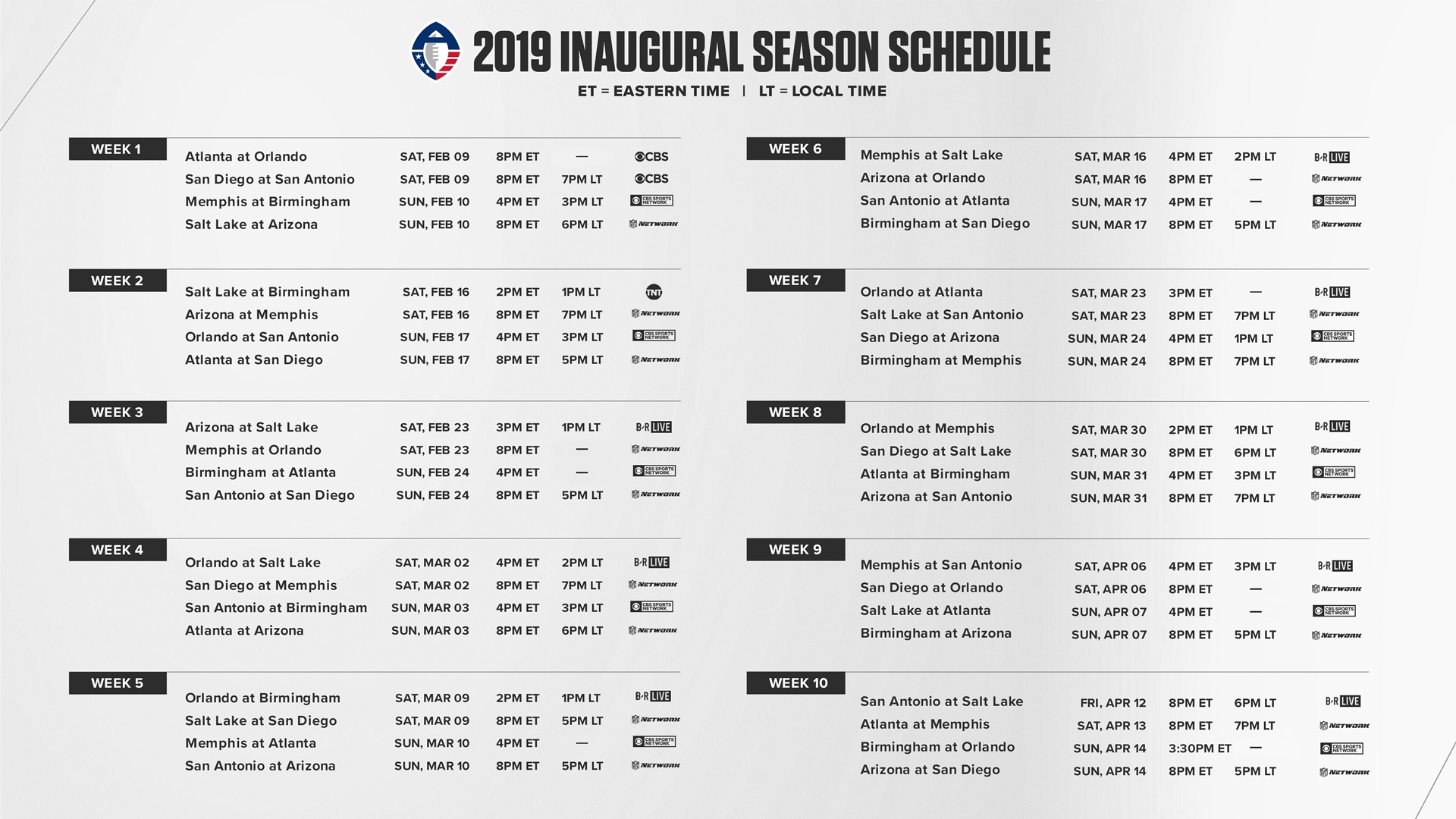