OAKLAND, CA. (BASN) — The Oakland Raiders are a ship lost at sea looking for a port to dock and play the game they love, football.

The autumn wind is a Raider

He’ll knock you ’round

And laugh when he’s conquered and won. 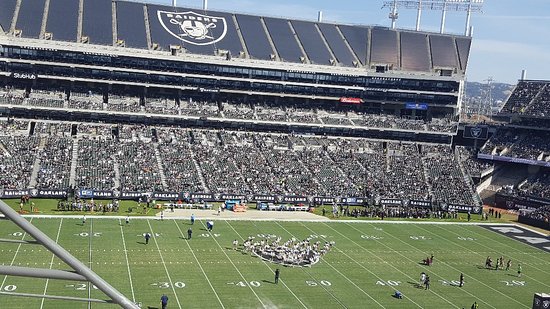 The National Football League will hold their draft selections the first week of April, but there is another big problem. The Oakland Raiders are still looking for a place to play in the 2019 season. The City of Oakland, the Coliseum Commission, and Mayor Libby Schaaf sued the Raider franchise this past summer after the club signed a lease for Las Vegas in the 2020 season, leaving the Bay Area-AGAIN and the state of California.

The Raiders left for Los Angeles, California in 1982 only to return in 1994. Every Black and Silver fan accepted that fact and actually many made it a weekend trip to the Southland during Raider home games. This is different. This stabs at the heart of Raider Nation. This is the end of an era for the Black and Silver in the Bay Area. The three-time Super Bowl Champion will no longer call Oakland home after the 2019 season. This ends the history of the Black and Silver, history such as The Holy Roller, The Immaculate Reception, The Ghost to the Post, and of course The Heidi Bowl.

The Oakland Raiders are one of the original eight American Football League teams in 1960 and are the foundation of the old AFL. The Raiders were the vanguard of the Western Conference along with the San Diego-Los Angeles Chargers, Kansas City Chiefs, and the Denver Broncos. In the 1970-1980 decade, they were one of the best team in the National Football League and the kings of Monday Night Football.

Leaving the state of California for Sin City leaves a bitter taste in most Raider fans mouths. These loyal fans have tasted lemons before. Oakland fans know the slogans that former owner Al Davis stated many times, “The Pride and Poise;” sorry they will not be coming back. They will not be any “Commitment to Excellence,” in the Bay Area. “Just Win Baby,” will move to the Nevada desert and a multi-million dollar home.

A part of the lawsuit reportedly could include the Raiders having to leave the team name, colors, and history in Oakland, like the Cleveland Browns did when they moved to Baltimore in 1996 and became the Ravens.

The City of Oakland will also lose 3,000 full-time jobs and that tax base not counting the other 2, 000 part-time jobs during the games

It is interesting to note that the new stadium in Vegas is currently named Raiders Stadium; will they have to change that too?

Meanwhile, current owner Mark Davis continues to look for a place to put his team and head coach and de-facto-general manager Jon Gruden continues to blow the team up, trading all-star Raiders to contending teams.

The Oakland Raiders may have come full circle on this issue of playing the 2019 football season at the Oakland Alameda County Coliseum but first, they went through eleven different stadiums. Eleven different options with the new season closing in. The Raider organization the past 15 days have been going through re-negotiation with the Oakland Coliseum Commission and the City of Oakland.

Here are the venues for the past six months.

Same as above with the Cardinal and city of Palo Alto. Stanford plays on natural grass.

This was never going to happen with the 49ers territorial rights and sharing the field with their East Bay foe.

This stadium like the Oakland Coliseum is too old to host NFL games the structure is falling apart like Oakland and Buffalo.

The old Rams found out this was not a good place to play with it being half empty every game and in a challenging part of the city of Los Angeles.

The issue of 49er territorial rights and the Mission Bay traffic jam when the Golden State Warriors or San Francisco Giants played on the same day. Mayor London Nicole Breed shot this down early in the negotiations.

This stadium is too small for NFL competition with limited revenue even-thou it is ready to be used immediately.

The issue of travel and jet lag going across the Atlantic Ocean two or three times a year could be a large task for the home team. Four weeks in London four weeks in the United States with a week off in between. The team would not be able to get into a rhythm during the season. The London field is less to be desired by NFL standards.

The Raiders would have to share a stadium with the University of Las Vegas. The stadium also needs improvements to move up to NFL standards. This would be a Houston Oiler-Tennessee Titan move step by step-year by year and owner Mark Davis wants to make a big splash now.

Both of these cities made bids to the NFL for home Raider games. Both cities were turned down.

All of these moves and the Black and Silver still might be the last team in the NFL to share a field with a baseball team, The Oakland Athletics in 2019.

This is not the Oakland Raider way.