The Popsicle Brothers or MIG (McClean-Ingram-Gray) Line has called Black hockey players Goal Brothers; they are currently making a statement in the Western Conference. These future superstars have become skilled players and team leaders on the ice. They are also slowly becoming fan favorites; it is time to embrace the new style in the National Hockey League.

It is very clear who are the four top teams are in the Western Conference. The Winnipeg Jets, and the Nashville Predators in the Central Division. The Calgary Flames and San Jose Sharks in the Pacific Division are a class above the others this year with an improved offense and stingy defense. The Vegas Golden Knights might have slipped just a little getting over the emotional ride of last year.

The Winnipeg Jets The first place Jets played very well January and early February like last year to lead the Central Division and the Western Conference. This year they have added a page to their winning ways, the month of March. The Jets went on a tear again in February and March to assure their playoff position and first place.

Forwards Patrik Laine and Blake Wheeler guide this offensive train in Canada with Goal Brother defensemen Dustin Byfuglien protected goalie Connor Hellebuyck and Winnipeg offensive stars. Byfuglien is now a senior citizen and playing better with each game. Big Buff had some injuries put can still pump that point shot at the net. Number 33 has limited his playing time due to these injuries but he is ready for the playoffs.

Winger Mark Scheifele and Mathieu Perreault are the men to watch when Jets are in the attacking zone The Big Blue Wave could be in the finals this year.

Jets have a much better power play and penalty kill units this year which makes them a feared team in the west. Winnipeg scores in bunches with their relentless offensive pressure. You do not want to go into the second period behind Winnipeg; the Jets win 80% of the time.

The Calgary Flames are the surprise of the 2019 season coming from fifth place last year to first place in the Pacific Division. The Flames did this with a different offensive and defensive system and different coaching staff. The penalty killing unit has kept the Flames in many games this year and that is the big difference

Forward Johnny Gaudreau, Center Sean Monahan, and forward Elias Lindholm have produced one of the most lethal scoring lines in the National Hockey League. This line makes other teams use their best checkers to neutralize these speed demons. 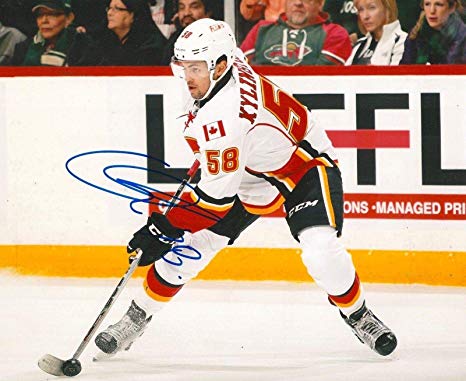 Here comes another defensive gem, a young fast and strong Goal Brother Oliver Kylington has seven points. Kylington ended the season on a strong note with three goals. He is very good at avoiding checks and drawing penalties and he has great puck control which will improve with age. Kylington is the fourth wave of Black players in the National Hockey League.

Goaltender Mike Smith will carry the load in the playoffs in net as the Flames have improved their defense. Players are sacrificing their bodies to block shots in front of Smith and backup goalie David Rittich this year something they did not do last year. Mark Giordano has the bruises to make that point blocking 136 shots. Calgary has solid backup net-minder with David Rittich in the goal crease as he stopped 31 Blue Jacket shots on March 19th in 3-0 Flames victory.

The Nashville Predators are on the march for their 3rd Stanley Cup Finals appearance. They have added firepower and grit in the front line with Goal Brother Wayne Simmonds from the Philadelphia Flyers. Simmonds just upgraded the Predators in toughness because Simmonds will go after pucks in the corner and behind the nets. 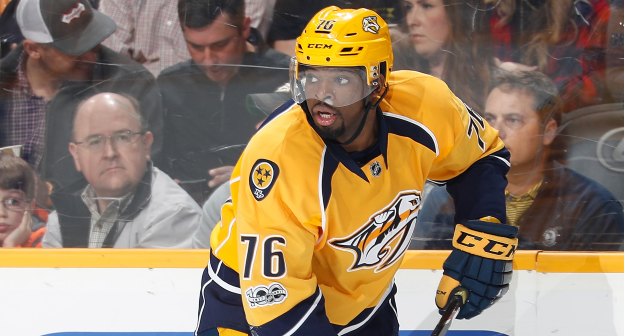 This is still the best defensive team in the western conference with defensemen Ryan Ellis, Roman Josi, and Goal Brother P.K. Subban. They have the experience of last year’s Western Conference Finals to fall back on.

Filip Forsberg is their offensive leader with 46 points and with All-Star P.K. Subban stabilizes that first line. Subban often generates team offense from his deep defensive position with his massive hard rising slap shot from the point. Center Ryan Johansen directs Subban’s rebounds to the nearest open man for a clear shot and goal. Subban is getting older and wiser on the ice i.e. a better player. He does not leave the point if the opponent has the puck like he did in his younger years in Montreal.

Goalie Pekka Rinne once again has been super in net; Rinne is playing so much better than last year and has to be frustrating to only be in second place in the Central Division.

The San Jose Sharks with the acquisition of forward Goal Brother Evander Kane from the Buffalo Sabres last year and Eric Karlsson from the Ottawa Senators this year, the Guppies-their Bay Area pet name, now have teeth in the offensive zone to score at will. Kane plays like Brother Wayne Simmonds of the Philadelphia Flyers-Nashville Predators and has become a valued scorer in Teal. Kane has the highest point total of his career 51 with ten games left. Kane, like Simmonds, has that toughness on the ice and will drive into the corner to dig the puck out and drive to the net. 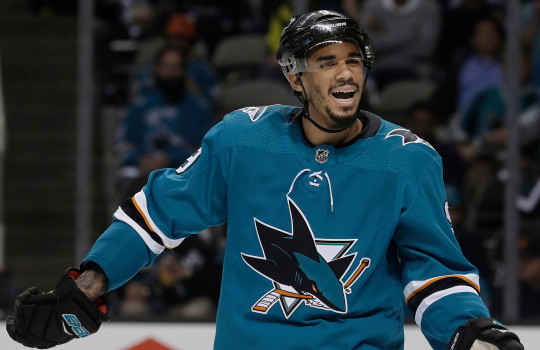 Karlsson might be ready for the playoffs with a lower-body injury; Sharks need his scoring talent to win the Cup this year.

Center Joe Thornton returned to his old self by mid-season. Thornton has almost recovered from last year’s midseason knee injury but now has to work on his endurance. It was the best thing for the San Jose Sharks because during Thornton absence Kane got acclimated to the San Jose offense as they acquired the big, strong, number nine from Buffalo.

Opposing players still do not want to go into the corners with Kane and it gives San Jose wingers more space and time to score in front of the net.

The first line, Joe Pavelski, Logan Couture, and Tomas Hertl has to explode in the playoffs this year or San Jose will be sent home again. San Jose Sharks has a big question mark at the goaltending position. Not sold on Martin Jones and Aaron Dell, too inconsistent and that could be a problem for Sharks in round two. Defenseman Brent Burns offense will be the key for the Men of Teal.

Love to watch defensemen Brenden Dillion and Marc-Edouard Vlasic turn plays around for the offense. Pickles-(Vlasic) can be a pest to opposing players as he interrupts so many plays in the Shark zone.

The Las Vegas Golden Knights were not the story this year.  The Knights became the darlings of the league after the tragic mass shootings of Oct. 1. 2018 This year it became just a bit tougher to win the conference or division. They are currently on a 9-1 streak but they will not catch San Jose or Calgary. All of the players drafted by Las Vegas had a career year in 2018; it would be very difficult for any team to duplicate that again. With the improvement of the Calgary Flames and San Jose Sharks, the Knights came in third place in the Pacific Division. It was also hard to sneak up on teams this year because teams have seen the Golden Knights offense. The energy in the building in Vegas has also changed since 2018. The emotion of last year’s Vegas team cannot be duplicated and it’s showing up this year losing close games.

Goal Brother defensemen Ryan Reaves had his best year in the NHL with nine goals and ten assists. He is so happy to get out of Pittsburgh. The Penguins did not know how to use Reaves talent, the Knights knew how and cashed in with a trade.

Marc-Andre Fleury reverted back to his old Pittsburgh Penguin days with inconsistency. The team would not let Goal Brother Malcolm Subban step in the net like last year and it cost them in January and February with critical loses and a third-place finish. Fleury let in too many soft goals this year.

Goal Brother Pierre-Edouard Bellemare left Philadelphia two years ago where he played sparingly to the west coast where he is having fun again on the ice. This year Bellemare has become the coach on the ice for the young Knights.

Saint Louis Blues- The Blues are skating uphill in the Western Conference because there are too many good teams that played better this year. The Blues are holding on to the coat-tails of first-string goaltender Jake Allen, and center Ryan O’Reilly with 69 points, it will not be enough. The injury list has hurt this team and it shows on the ice. Players missed easy offensive passes too many times thus creating blown goal chances. This year only two players have played 70 games.

Injuries have hurt this team the second half of the season. Winger David Perron missed two months and it showed as St. Louis slid from first to third over the winter quarter.

Center Erik Foley is still wobbly from the concussion in October. Foley will be needed for the playoff drive. Winger Vladimir Tarasenko returns to the lineup just as the stretch playoff drive begins

The team finally got healthy this week as they defeated the Edmonton Oilers 7-2 on March 19th They have two weeks to figure this out or get bounced out of the playoffs in the first round.