This was written eight years ago things have changed in Chicago since 1979. MLB now has franchises in the states of Florida and Arizona. New York built two new baseball parks, The NHL’s Hartford Whalers and Quebec Nordiques no longer exist, The National Football League expanded to four divisions in each conference and the St. Louis Cardinals are now the Arizona Cardinals, the Baltimore Colts no longer exist and the Atlanta Falcons and New Orleans Saints play in the new southern division and no longer in the west. In Chicago the Cubs and White Sox both won the World Series. The NBA’s Chicago Bulls three-peated twice as Champions and basketball superstar Michael Jordan played baseball for the Barons in-between the Bulls championships. American women won four international soccer championships.

There have been six new presidents in Washington D.C. The HIV-AIDS crises just started in the San Francisco Bay Area, it is no longer a death sentence.

America built and now use the international space station.

America still cannot solve the race problem in the United States after 40 years.

Many African-American musicians never forgot what happened at Comiskey Park July 12, 1979. Disco died, Grunge Rock grew and Quiet Storm Radio blossom all over the country. America had changed forever and Chicago was just another bump in the road. 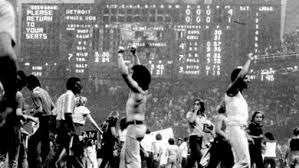 OAKLAND, CA (BASN)—It was the end of an era. The presidency of Jimmy Carter and the dominance of the Democratic Party ended in Washington, D.C.The American and Iranian governments were at odds with each other. Diplomatic communications were strained that summer. It led to the American Embassy Hostage Crisis in Tehran, November 1979.

The New York City Commission finished their report on the massive blackout that affected the city the previous summer. Immense structural failure claimed to be the reason for the blackout.

The last of the American Civil Rights Movements started to be heard throughout America.

In 1979, the sports world moved quickly into the 80’s. The Seattle Supersonics defeated the Washington Bullets four games to one. This was one of the lowest rated televised series broadcast in NBA history at that time.

The League and CBS broadcasted playoff games on delayed tape. West coast basketball fans turned their TV’s off during the Five O’clock news so that they could not hear the 3rd or 4th quarter score.

That same year, the Montreal Canadians beat my beloved New York Rangers four games to one in the Stanley Cup Finals. Not many watched this series because the league was re-negotiating a contract with three major networks.

Almost a year earlier in October of 1978, the New York Yankees repeated as World Series Champions beating the Los Angeles Dodgers four games to two. It was the highest rated series televised at that time. Number 44, Reggie Jackson cemented his place in the baseball sun with two great World Series years.

Basketball and hockey were struggling while baseball seemed to be doing fairly well on both coasts. However, they had difficulties attracting younger fans in the Midwest except in the St. Louis area. This phenomenon grew in the 90’s and the turn of the century.

Sports executives tried everything to get fans to the stadium or ball park. Bill Veeck, owner of the Chicago White Sox, was a well known maverick. Veeck tried something new to get young people back to Comiskey Park, located on the south side of Chicago.

Comiskey Park seated about 55,000 people, but on this night 85-90,000 fans showed up to attend this promotion. Many tried to enter by climbing through or up the outside walls of the stadium. These young people did this with the help of their friends inside the park.

The Chicago Police Department finally blocked the streets leading to the stadium. Something that local police should have done hours earlier. This late police action prevented late comers from even getting near the Stadium. Watching WGN-TV the White Sox baseball television network, fans wanted to join in the fun.

The ticket exchange plan was for White Sox fans to bring old disco 45’s or LP records to the park in exchange for the reduced admission price of 98 cents.

The records were destroyed in between games of a doubleheader against the Detroit Tigers.There was a subtle racial overtone to this promotion. Something that the demolition promoters deny to this day. Steve Wonder, Marvin Gaye and Motown records were found on the field hours later.

Remember Disco was a basically African American music genre that swept the nation in the middle 70’s. It reached its peak in 1976-1977 and was led by the Bee Gees, a white group from Australia. The group had several hits that year, mainly Disco tunes from the movie soundtrack of the 1977 hit movie “Saturday Night Fever”.

It seemed that white middle class America had enough and wanted disco music to end.

Everyone knows when you make it on the big movie screen; the political, social, or economic movement is just about over. That is exactly what happened, there was a complete backlash.

Radio Stations throughout America changed their music format from disco to hard rock, rock and roll, old school, soft Rhythm and Blues or news talk radio. Quiet Storms came on the radio from Philadelphia to Oakland after 7pm

“Saturday Night Fever”, starring a young John Travolta, hit the theaters in the fall of ’77. This movie was a disco movie about a troubled teenager’s life in New York City.

This movie was the straw that broke the camels back and led white America into a revolt against disco music. Many people wanted to see disco records destroyed. The music industry kidnapped the new art form and made it mechanical

The stage was set as thousands of fans filled Comiskey Park to overflow capacity. The majority of the crowd were very young and white. There were reports of fans under the influence of alcohol and other hard drugs.

When the first game came to a close an unruly crowd began to use their old records as frisbees. This naturally led to fans throwing firecrackers and drinks on the field. With each passing second, Comiskey Park became a time bomb ready to explode.

It created a very dangerous situation for the players on the field. The Tigers did not want to continue the game. The Detroit Tigers won the first game of the doubleheader 4-1. But the question was would they start the second game.

Both teams ran to the clubhouse to get away from the hysteria at Comiskey and to rest for the second game 45 mins. later.

The White Sox and Tigers did not return to the field for the next game. 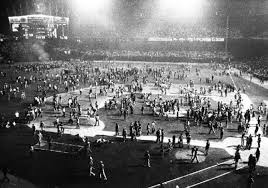 Veeck and Chicago announcer Harry Caray tried to get this unruly crowd back into their seats with announcements, but it was too late. The genie was out of the bottle and the fans destroyed the field with bonfires, bricks, broken glass, records, and burning turf.

Disc-jockey Dahl dressed in Army fatigues kept yelling, “Disco Sucks!” while circling the field in a rented jeep. He stirred up a crowd which did not need prodding.

When the time for demolition came, the explosion was bigger than the promoters expected and it resulted in ripping a big gaping hole in the outfield grass. Thousands of fans jumped over the seating rails and onto the field to join the mayhem, burning banners, and throwing objects.

The batting cages were even destroyed in the melee. Fans were drinking in the dugouts, and making out in the outfield. It was pure bedlam.

Order was somewhat restored an hour and half later when a battalion of the Chicago Police Department encircling the field and escorting the crowd politely off the field. It was reported that there were 39 arrests and 17 injuries.

The Tigers refused to take the field for game number two, forcing the White Sox to forfeit game two of the double hitter.

The quick patch up job on the outfield grass was uneven and players throughout the American League complained about it for the remainder of the 1979 season.

ESPN, The Evil Empire, The Mouse, The RAT, or what ever people call it these days aired a series two years ago called “Sports and the Influence of Music,” on their Sunday morning news show, “Outside the Lines’.

The incident at Comiskey Park with it’s racial overtones was an ugly episode in sports and baseball history. ESPN however never addressed this issue during the broadcast. The Sports network omitted glaring facts about the incident.

The ESPN broadcast stated that the incident was a lighthearted protest by young people. The network never addressed how dangerous this situation could have been, nor did they report that 95% of the instigators were young and white. This was a legal riot and the Chicago Police Department just stood around and watched.

The incident cast disparagements on African American music and dance. Not a single individual from the adjacent African American community in the City of Chicago was interviewed. The question should be asked, what kind of journalism was this?

Many of the participants in this riot were granted interviews, with red eyes, smiling red faces, and garbled slurred speech. ESPN tried to portray the incident as a walk in the park by misguided youth. Now imagine if these party people were African-American it would have been a different story.

The truth is if young African Americans had been the majority in that unruly crowd 40 years ago it would have been a riot. Ninety percent of the offenders would have landed in Chicago’s city jails and the Cities National Guard would have surrounded the stadium. Tear gas and batons would have been used. Politeness a thing of the past.

It would have made national news.

But instead, this incident was a joke to most major news agencies in 1979.

ESPN and their sister stations continue to insinuate this kind of racial innuendoes and hidden racial commentary by rehashing and glorifying this deplorable part of baseball history.

This kind of yellow journalism continues to notify African Americans that we Black Americans have a long way to go in race relations in the United States — no matter whoever resides at 1600 Pennsylvania Avenue.