(Editor’s Note: With the opening of the 2019 college football season, we at BASN NEWSROOM feel it is time to revisit an issue we first took on at BlackAthlete.com a decade ago…

With all the bullshit and blather about what Black quarterbacks can and can’t do, the only undefeated, untied, unblemished QB in collegiate history Is Black – and still not in the College Football Hall of Fame…)

Chuck Ealey, quarterback of the Toledo University Rockets, leads his team to an undefeated season in 1969:

Poet / essayist Amiri Baraka (nee Lee Roi Jones) once said of jazz saxophonist Charlie “Bird” Parker, (paraphrasing), “everyone should be glad Bird could play like he could, because if he couldn’t blow that horn, he would have killed a whole buncha muthafuckas.”

The rule in improvisation is to learn the rules, so they can be broken. While creativity in structure can be as upsetting to some as seeing a roach crawl out of their morning bowl of raisin bran (after they’ve poured the milk), when it directly evolves into brilliance, sometimes that light is too bright for those deigned keepers of the flame.

Apparently, this seems to be the case when it comes to living legend Chuck Ealey, the only undefeated and untied quarterback in collegiate history. 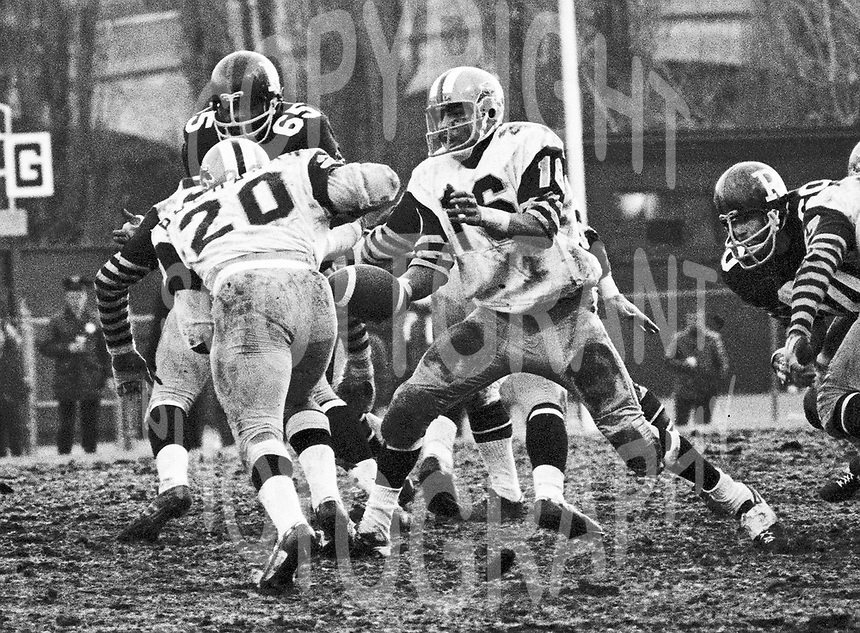 The National Football Foundation (NFF), who selects the nominees for election to the College Football Hall of Fame may well be in need of shades, for they seem to be afflicted with this sensitivity to the light of truth; or, at the very least, fact.

Chuck Ealey leads the Rockets to an undefeated season in 1970:

According to The NFF’s web site, there are specific criteria that may be used for evaluating a possible candidate for induction into the Hall of Fame.

NFF members and the coaches, athletic directors, and sports information officials representing member schools may submit nominations for consideration. Nominees with the highest votes received from one of the eight District Screening Committees (DSC) located closest to the nominee’s college or university are included on that year’s ballot, which is distributed to all NFF dues-paying members.

Selection of Hall of Fame inductees, however, is ultimately determined by the Foundation’s Honor Court. The criteria are as follows:

Ealey was named as a first – team All – America quarterback by Football News in his senior year, 1971. While suggestions and efforts to grandfather the rule to apply to all first – teamers since until the publication folded over 25 years later, NFF has shown a deaf ear to this possibility of redress.

As he would relate in a recorded interview, Ealey reiterated his contention that the only place he could get to play quarterback was at Toledo University.

While the rise of universities like Toledo into “mid – major” schools was an eventuality, the process remains flawed because Ealey is essentially being penalized for being Black, playing at a small school, and having the nerve to want to play quarterback!

Ironically, Ealey would have a longer pro career than the passers picked above him in the Heisman voting that year (Auburn’s Pat Sullivan, Nebraska’s Jerry Tagge and Oklahoma’s Jack Mildren).

The ongoing efforts of a website started by two Toledo alums, Rick Longnecker and Matt Armstead, addressed that issue several times through their website www.InductChuck.com

Through his research, Mr. Longnecker found a flaw in the NFF’s process, and wants not only to clear a path for his alum but facilitate a fairer selection scenario for other deserving collegians. “Based on the NFF’s logic in this undertaking, reveals Longnecker, ‘as their rules stand now, Joe Montana as well as Chuck Ealey would not be eligible for nomination to the College Football Hall of Fame.”

Through his foundation, which centers on education, accountability on and off the field and, as according to his group’s mission statement, “developing an Undefeated spirit”  Chuck Ealey has complied with enough civic wherewithal and love for two countries, putting forth equal effort in the United States as well as his current country of residence, Canada.

Although it seems as if Ealey’s well within the time frame, given the effort by the NFF in gleaning this information, he’d best stay in shape so he can walk to the podium once his name is called;

While Ealey remains the essence of professionalism by his sheer presence in the midst of this maelstrom of myopic, misguided myrmidons, the completion of his athletic career falls well within the parameters…

In 1971, Chuck Ealey leads his Toledo Rockets to another undefeated, untied season – and a third straight post – season victory in the Tangerine Bowl:

On March 3, the NFF announced the names of 76 players and 6 coaches for consideration for the Class of 2009 and the College Football Hall of Fame. Chuck Ealey’s name remained among those missing and unaccounted for.

In a statement, NFF Chairman Archie Manning would comment, “Having a ballot and a voice in the selection of the inductees is one of the most cherished NFF member benefits.  There is no group more knowledgeable or passionate about college football than our membership, and the tradition of the ballot helps us engage them in the lofty responsibility of selecting those who have reached the pinnacle of achievement in our sport.”

True to his personal ethics and the game, Ealey refused to comply with inferences from the National Football League to be drafted to play at a position other than the one he played best. “If 35 – 0 couldn’t convince the NFL that I was a quarterback,” laughs Ealey,  ”what else would there be to say?”

Perhaps that is a question better suited for the NFF.