THE TOP 10 MOST FUCKED UP REASONS WHY THE NFL SUCKS – OVERT RACISM, PART I

PHILADELPHIA (www.basnnewsroom.com) As the National Football League celebrates 100 years of existence, there is always “the rest of the story” – and the toxicity of racism akin to plantation owners bragging about the proclivity of their slaves between mint juleps…continues.

My esteemed colleague Gary Norris Gray (as we all here at BASN NEWSROOM) espouses the on the field belief that “best man plays” – but, having been in a few press boxes over the years, that don’t manifest everywhere in the NFL universe.

Outright Dick Dastardly Acts before by the League and the mindless muthafuckin’ myrmidons who roam it disguised as journalists. So once again, in the spirit of the NFL Network’s “Top 10” programming, we humbly present

THE TOP 10 MOST OVERT ACTS OF RACISM PERFORMED ON ATHLETES BY THOSE CONNECTED WITH THE NFL’S SHIELD BULLSHIT!

NUMBER TEN: THE SLANDERING OF COLIN KAEPERNICK, PART I

In 2012, some asshole named David Whitley, then a columnist for The Sporting News, wrote an unnecessarily incendiary column about Kaepernick in the midst of his success prior to an upcoming Super Bowl.

Whitley laced into Kaepernick’s tattoo – covered body, according to a column by Ryan Wilson of CBS Sports. In it Whitley asserts that

“San Francisco’s Colin Kaepernick is going to be a big-time NFL quarterback; that must make the guys in San Quentin happy. Approximately 98.7 percent of the inmates at California’s state prison have tattoos. I don’t know that as fact, but I’ve watched enough ‘Lockup’ to know it’s close to accurate.

“I’m also pretty sure less than 1.3 percent of NFL quarterbacks have tattoos,” he continued. “There’s a reason for that. NFL quarterback is the ultimate position of influence and responsibility. He is the CEO of a high-profile organization, and you don’t want your CEO to look like he just got paroled.”

So clearly this muthafucka never interviewed him face up; because he would’ve also realized the tattoos on Kaep…were Bible verses – but let’s not the truth creep in on an asshole’s story…

When Whitley tried to alibi by saying he has two adopted African – American daughters (so he can’t possibly be racist, very White of you!) I would merely say they probably think you’re an asshole, too – as well as an arrogant, ignorant piece of shit; but the fact Sporting News didn’t self-check Whitley’s worthless ass – says more about Sporting News endorsing him than the fallout from his three-alarm bullshit!

In 2015, Taylor signed a three year free agent contract with the Buffalo Bills after breaking in backing up Joe Flacco during the ‘Ravens Super Bowl run in Baltimore.

After winning the starting QB job, he gets screwed on opening day by his head coach, Rex Ryan – who lines up Taylor as a wide receiver and has backup Matt Cassel lined under center for the first offensive play. Taylor would then play the rest of the game at QB and win, beating Indianapolis, 27-14; but because he didn’t start the game, Cassel got credit for the victory!

Taylor develops a reputation as a quiet leader who rarely turns over the ball – but even that wasn’t enough for a toxic Bills’ front office, who benched him in 2017 after Ryan was fired. In spite of a winning record, Taylor gets benched for the “next franchise quarterback,” Nathan Peterman, who makes his debut start that following week against the Los Angeles Chargers.

Peterman then throws more interceptions (five) than Taylor had thrown all season (three) – in one half of football as the Chargers waxed dat azz – and Taylor got his starting spot back.

Taylor soldiered through injury and other in-house bullshit while guiding Buffalo to a 9-7 record – and their first playoff spot clinch in 17 years! The media coverage, however, was never favorable toward Taylor as he took the Bills to a place they hadn’t been to – in almost a generation…

His reward? Gettin’ the fuck outta Buffalo; only to walk into the Next  Great White Dope, Baker Mayfield, in Cleveland. Taylor is currently backing up Philip Rivers in Los Angeles.

In a game against Oklahoma A&M University (now Oklahoma State) Bright was targeted by players and had his jaw broken deliberately by a cocksucker named Wilbanks Smith. To my recollection of video seen, no Drake teammate stepped up to back him up. The beating forced the NCAA to prepare protective face gear as standard equipment.

How is the NFL affected by this? When the Philadelphia Eagles attempted to draft Bright, he declined (because of the racism he experienced in college, and that the League did not want a Black quarterback) and moved to Canada, where he put together a Hall of Fame career, mostly with the Canadian Football League’s Edmonton Eskimos…

The man known as “Jefferson Street Joe” was one of two Black signal callers screwed by the League from Tennessee State University- in this case, the Pittsburgh Steelers are the culprit. Drafted in the 11th round by Pittsburgh in 1972, Gilliam was the 273rd player selected. 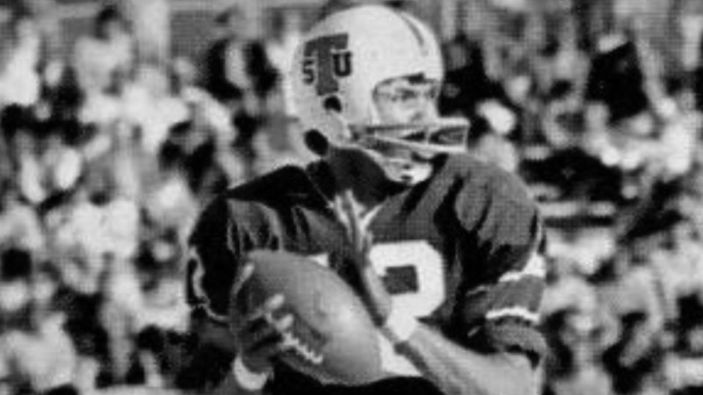 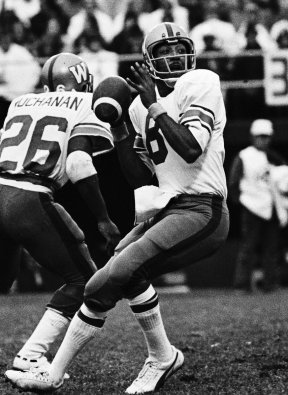 In two years, he had outplayed teammates Terry Bradshaw and Terry Hanratty and won the starting job outright in 1974.

As he led his team to a 4-1-1 record (not 1-4-1, but 4-1-1) that season, Gilliam was benched in favor of Bradshaw; while no clear reason was given, truth would be revealed two generations later as to why.

When the NFL Network aired the Al Davis episode in its “A Football Life” series, a segment beginning 22 minutes in speaks on Davis’ relationship with Steelers’ head coach Chuck Noll. Bradshaw calls up Davis, butthurt that Gilliam was starting ahead of him – and cries to be traded.

According to Davis, he calls up Noll and says (paraphrasing), “Why are you playing Gilliam? You should start Bradshaw – you can win with him.”

Only in the Negro Fallout League can a Black man win over 70 percent of the games he starts…only to be benched for a White one that had yet to succeed.

Another reason why also had to do with the young man who would become a lightning rod for not just professional football, but society itself.

Expressing his disgust at the short shelf life of Black men dying at the hands of the police, Kaepernick, while playing quarterback for the San Francisco 49ers, took a knee in protest prior to the beginning of a football game three-plus years ago. When he explained why, it caused a firestorm and an immediate effort to discredit him.

After the initial shock wave of bad intentions, support for Kaepernick’s stand began to creep in from everywhere – especially the military, who defended Kaep’s right to speak in the face of pernicious attempts to defame, and, ultimately blacklist him.

As more incompetent (but White) quarterbacks littered NFL rosters, any possibility of having Kaepernick on an NFL is down to near nil.

The NFL’s greatest advantage over other team sports was that no matter how bad or good the overall product may be, the demand was always strong; that is clearly not true now, and in attempting to expose Kaepernick, it only showed that people who live in glass houses…should always undress in the basement! 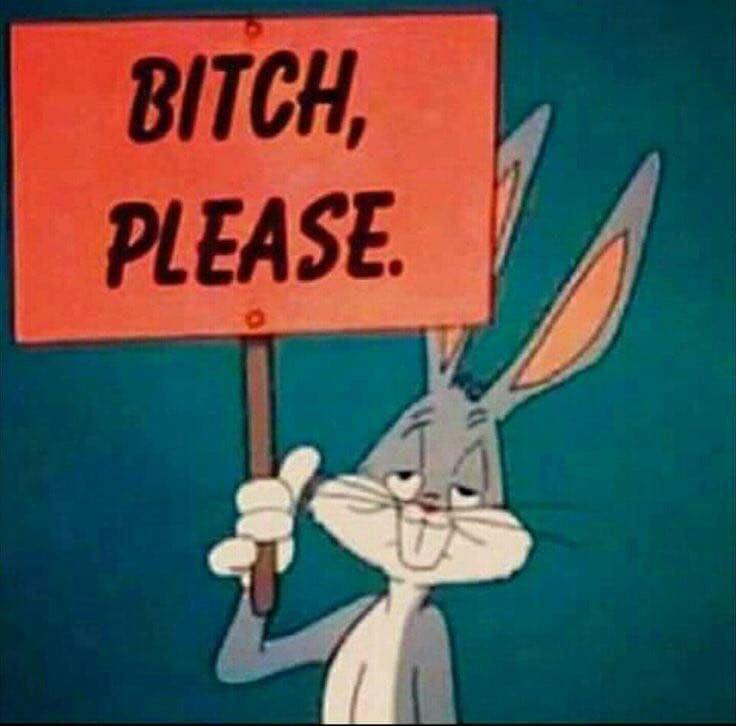