PHILADELPHIA (www.basnnewsroom.com) It didn’t take long to see truth exposed on a television screen on May 25, 2020:

WOULD A WHITE GUY DIE FOR TRYING TO USE A COUNTERFEIT $20 BILL?

Before we forget, this is how it started: George Floyd, now deceased, was choked to death after allegedly (I say ‘allegedly’ because we don’t know whether he knew it was fake) paying for food with a fake twenty…

I don’t pretend to be a lawyer here, and the laws may vary state – to – state, but where I come from, the bill is taken and the person is told the bill is fake and why; and no, ya don’t get the food (unless you got real cash)

So how this escalates from what should have been an arresting moment (although I have to wonder about ‘forgery’ as a crime if the bill wasn’t initially his) provokes another question:

WOULD A WHITE GUY GET ARRESTED, CUFFED AND BROUGHT DOWN BY FOUR COPS…FOR TRYING TO USE A COUNTERFEIT $20 BILL?

Was this a life and death issue where the alleged perpetrator is prepared to do harm? Was there a weapon brandished? Was the man in a drug-enraged stupor? Was there anything indicated in the video (drastically redacted or not) which would indicate that any of those officers’ lives were in danger?

As the cuffs are being slapped on, the cops are walking him to the other side of the car. Aside from harsh language, the guy can’t do anything!

Then come the cries of “Stop resisting!” which really beg for identification; how the FUCK is he ‘resisting’ if he’s cuffed? So let’s justify dehumanizing this ‘criminal’ by fucking him up as we take further liberties with him – which begs the next question:

WOULD A WHITE SUSPECT HAVE PRESSURE PUT ON HIS CAROTID ARTERY FOR THREE MINUTES (BRAIN DAMAGE)? FIVE MINUTES (HIS ASS IS DEAD)? SEVEN MINUTES (JUST MAKING SURE)? EIGHT MINUTES (LET’S PUT HIM IN THE AMBULANCE) FOR TRYING TO USE A COUNTERFEIT MUTHAFUCKIN’ $20 BILL?

I know you are working so very hard at killing us Black folks. While methodology has pretty much been the same; be it physically by assault and murder or psychologically by breaking his spirit (love those slave analogies, don’t you?) by squeezing the air out of him like a balloon – and stealing his humanity?

Or shooting him several times if front of his wife and child (to make sure he’s dead) over a bad reaction to a traffic stop?

Between the “I can’t breathe” said by Eric Garner (selling loose cigarettes)  and Mr. Floyd (he’s ‘Mr’ now that his Black azz has been choked to death) is the ‘I have a license to carry’ uttered by Philando Castile as a cowardly prick named Jeronimo Yanez riddled him with bullets…

Or Eric Garner, selling ‘loosies’ – loose fucking cigarettes…see for yourself…

Fucking disgusting. Not likely to do that to a White guy…

Or a White woman, as this CUNT-CAKE tries to weaponize the NYPD:

Just think about that – she dropped that threat as if she hit the Life Alert button: (“I’m being confronted by a Negro because i’m violating the Leash Law in Central Park – and he won’t let up!”)

Fake apologies later, the dynamic of knowing she could have gotten this man killed or at least arrested is lost on her trifling ass…

Or this muthafucka Ronald Ritchie, who falsely claimed John Crawford III was walking around a Dayton – area Wal-Mart with a real gun. This wasn’t an “Oops, My Bad!” moment – this piece o’shit got someone killed behind bullshit; and he belongs in Gen Pop as an accessory to murder:

Lynchings aside, we know you are collectively desirous in becoming more efficient killers. We know a sterilization here and a sterilization there seem too tedious and slow for you; and an odious swamp sow like Margaret Sanger definitely put her two cents in – but sorry to say, there will still be more Black folks here on this ball o’ dirt a year from now…five years from now…

A generation later…perhaps this is the real response young Cyrus had in mind when he asked:

We know what they can count on, don’t we? Count on “leaders” having a short lifespan. Besides, you love the way that life force oozed out that Black man, didn’t you? That’s why he’s not arrested yet!

So is this the Constable On Patrol that choked out that Black man? 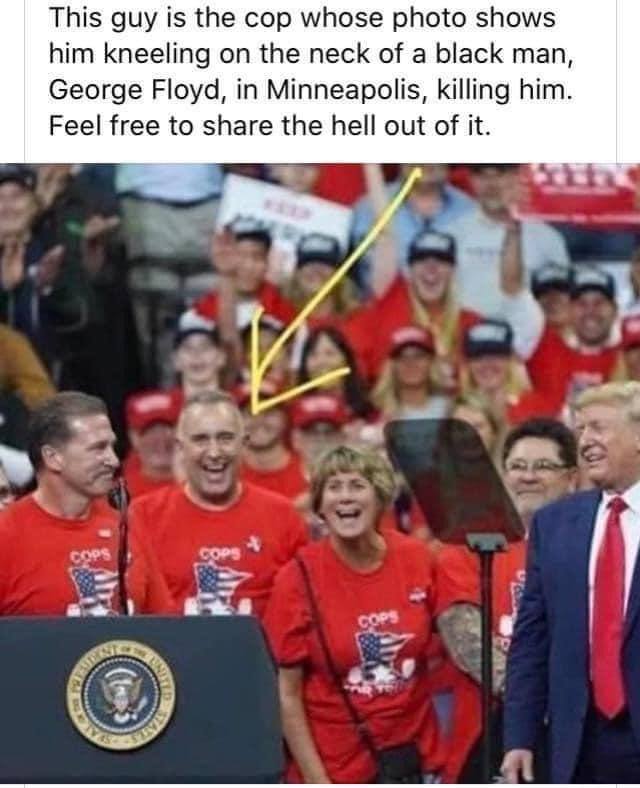 If it is, it might speak on the whole situation more clearly than anything else!

So we add state – sanctioned murder to the list? Dayyum – I know you’re trying hard as hell to kill as many Black/Brown/Red/et cetera folks as possible, but could you please stop being so muthafuckin’ BLATANT about it?

How about we mutually agree – to die from old age, how’s that sound? And I don’t mean by shooting us up with shit which generates Parkinson’s – like symptoms, either! We saw what happened the last time you pulled dat shit…

“I’m STILL ‘The Greatest’ in spite of what they did to me!”

How about Boycotts? We know they work, but they may not offer immediate gratification. Will a sustained effort to boycott Target stores and Delta/Northwest Airlines do damage?

When they sit you down and they ask you, “What you want?” you know your point has been made….

When cops do dirt (respect to all good cops who catch the bad guys and get home safe to your loved ones every night) tap that wallet – and take that pension; that will stop a whole lotta bullshit right there!

Humanity, however, ceased to halt on May 25 – when a fake $20 bill forced the death – and the last breath – of a man, who, were he a member of another ethnic group, would be out twenty dollars…

instead of outta time.

One thought on “THE 25TH LETTER”